My first real peak since the accident! I’ve kept thinking this every time I’ve done anything remotely vertical, and it’s more than a year ago now. That being said, this was a proper peak, and although relatively easy it does come under the category of alpinism.

We had left Grenoble on the Friday evening after work. J, JB and myself. Large packs full of food, ropes, tents and kit had been thrown into the boot and we’d set off towards La Grave. Overcast skies announced the storms that were supposed to hit the Alps during the night. Arrival at the small village we still had enough light to look up, up towards La Meige and the building that showed the cable-car station atop the mountain. That was our destination. We weren’t going to take the easy way though. Seriously? Yes. What kind of cheap students do you think we are? We prefer to hike the 1800 metre climb! So off we went, happy to be in the mountains and still dry. As we climbed the view unfolded behind us: first the Aguille du Goleon (which I had tried to climb a few weeks before with T) followed by Les Aigulles d’Arves and the Grandes Rousses. To hike up there are several possibilities, but we chose the path that goes up the Vallons de la Meige. This is one of the most classic descents in the winter; it was strange to see it all without the snow. We also realised that some of the places which on skis seem like a joke are quite steep without the powder! Three hours in, we were in a massive moraine (scree formation made by glaciers), in the dark and trying to find a way up. Two hours later we had finally made it to the top. Completely exhausted we searched around for a small hut which was supposed to exist near the cable-car arrival. Perched on the edge of cliff a small wooden cabin welcomed us in out of the cold. We immediately ate and went to bed. Tomorrows objective: Pic de la Grave!

Or not. We tried to sleep, but the fact that if sounded and felt that the cabin was being ripped off the mountain didn’t help. As it swayed in the wind, we could hear the thunder all too close. It slowly quieted down and we got some sleep. Next morning we awoke to a small covering of snow around the hut. Although it didn’t look promising we did set out, but it was immediately obvious that the weather wasn’t really great. We hiked out onto the glacier de la Girose in the fog. After climbing to the foot of Pic de la Grave we still couldn’t see it. So a leisurely walk took us to the Dome de la Lauze and down again. Back to the cabin and a lazy afternoon, hoping tomorrow would be better. Come on August! 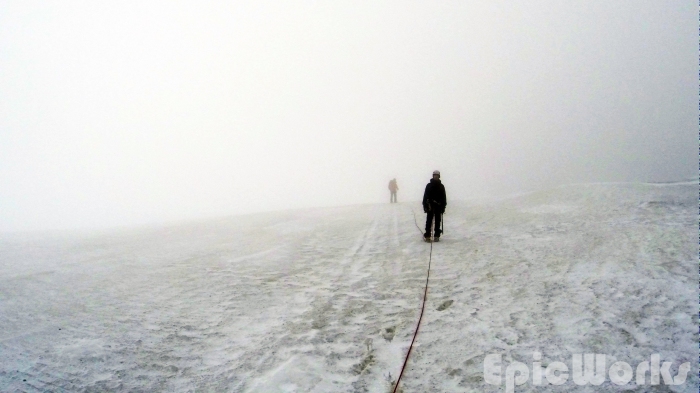 This is August. Fog and Glacier mix. Again!

A windy night didn’t bode well, and our spirits weren’t too high in the morning. The objective was the west peak of Le Rateau via the west ridge. We set off following yesterday’s footsteps, the wind was still sharp. The first part of the climb is a small snow slope that goes up to the Col de la Girose. As always with this type of thing, it’s right at the beginning I feel the most scared. “Why am I doing this? It’s going to be awfull! Just look at that; if I slip there I’ll freefall for a few minutes!” All this goes through my head as I start to rope up. I hope once I get going it will get better. I didn’t use to be so worried; I can’t blame it on the accident. Maybe I’ve just lost it… But I had to forget all of this as we started up, climbing over the bergschrund or rimaye (the crevasse that separates glacier from mountain). The snow slope, as always, was easier that it looked from below and we got into the rhythm of things. Up to the Col de la Girose and then to the base of the rock ridge. Here we put our ice axes away and with J in the lead, started the climb. It slowly got steeper as we went up, but never really difficult. Advancing as a unit, the leader puts the protections in, while the rear-guard pulls them out. This way if anyone slips, the whole group always has the rope through something tied into the mountain. It is also much faster that belaying and can be used in easy terrain. Soon we were half-way up, and although the wind was still very cold the first cable-cars hadn’t arrived yet.After the last metres of an icy couloir we had a choice: either climb a steep wall in front of us or go around to the right.

Around the right hand side. Peak in vicinity.

A clear path took us around the obstacle and after a steep section we could almost see the top! A few more metres and we were there! As the clouds cleared a bit, we could see La Meige, looking down on us. But that was it, as everywhere else the mountain fell away several hundred of meters. Finally, after so many outing this year we were on the top of something worthwhile!

After a quick Mars bar we headed down. As always, I’m also worried about the down climb. So much so I don’t enjoy the going up that much. And as always it was fine, and not as difficult as expected. As we went down I started to really enjoy it, realising this was what I used to do. No worry, just the peaks and myself going over the rocks. No accidents. Careful teamwork and good technique. As we descended we crossed several other groups, including some Italians and a group of friends from Grenoble. Finally we were back down on the glacier in front of the cable-car. By this time (about mid-day) the tourists had come up to ogle at the glaciers. When asked by a Dutch family where we had come from, and pointing at Le Rateau, we were told “many mountaineers die every year!”while they looked at the peak in awe. Resisting the temptation to shrug it off with a “we play with death every weekend”, we pointed out it was in fact a pretty easy route. The 10 year old kid we had crossed on our way down confirmed that!

Downclimbing. With J in the foreground and Les Ecrins behind.

All in all a good weekend, and although we had capricious weather we finally managed a peak. Oh, and I learned a new word: Rateau means rake! That just leaves Pic de la Grave for another outing, maybe on skis? That would be a good descent!

View from our cabin. Not bad!