My only previous experience of Austria was a very short stay punctuated with a visit to Vienna and an extremely cold night sleeping in a plastic bag halfway up a hill (remember Hugo, Aron and Ede?). I must say I was not extremely impressed, and found the capital slightly too overbearing. This time I was back with a few days to spare before work in Leoben, and things were very different. Thanks to my hosts in Graz and Villach, there were no more cold nights, and I was able to see another side to this beautiful, mountainous country.

I started off in the Styrian capital, Graz. It’s a medium sized city with a beautiful centre and a very artistic feel. It also houses many research institutions and a young student population. Getting onto the tram line, I soon arrived at my friend Georg’s apartment.  After visiting the town and trying some of the specialities (such as the pumpkin seed oil and pretzels) we were ready to head into the mountains the next day.

Driving up towards the north, we left the flater regions around Graz behind. Turning left at Trieben, we were soon gaining altitude and were able to leave the car near a small lake at the end of a glacial valley. G had planned a hike up along the ridge, towards the G. Hengst and then onto the G. Bösenstein. The path climbed swiftly and we were soon on a clear edge that gave us a great view on both sides. I could see far into the west, where the mountains slowly climbed higher. It welt strange to be right on the other side of the Alps. The first snows were on the way, and the higher peaks had a sprinkling of white. From above we could also look down onto the Sheibelsee lake from where we had come up.

Arriving on the Bösenstein we had the option to climb down or keep going. We decided to follow the sharp ridge towards the Sonntagskarspitze. It looked pretty jagged, but there were clear markings, so we decided to follow them. After a first steep descent, a cable allowed us to cut across a steep edge, before climbing up diagonally and reaching the ridge again. From there we were able to follow the marks along the outline. We even surprised a group of mountain goats, perched atop the sharp rocks. Climbing up and down we made progress towards the next peak. I was surprised how well kept the path was. It was quite vertical, but the marks were clear and the more difficult passes had some sort of protection or other. This meant that we didn’t need any kit, and were able to enjoy such a great hike. Arriving on the Sonntagskarspitze we looked back the way we had come. It was hard to make out the exact itinerary.  From there we descended back into the valley and made our way back to the beginning thus closing the loop. G’s hospitality of course included some more bier sampling… Beginning of the ridge 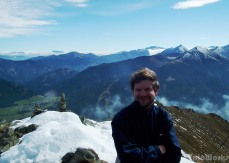 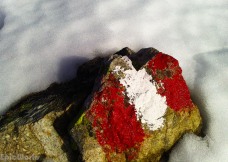 The flag marks the way. 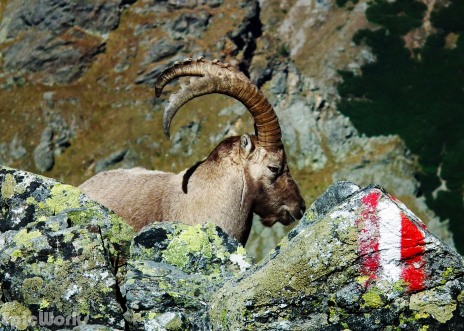 Outline of the goat.

G scrambles up one of the steeper parts

Looking back we can just make out the ridge.

After this quick taste of Styria and the central Austrian Alps, I was on the train again, heading towards Villach, which is near the Slovenian and Italian borders. It is quite small, and like my hosts Lionel and Sophie I think almost everyone works for the same microelectronics company! It felt like a miniature, German speaking Grenoble! After a few beers we planned our first outing, near the Slovenian border. Unfortunately, next day was overcast, and did not get better the further we approached our destination. Our objective was a ferrata type path, which included some metal bridges, but visibility progressively decreased to almost zero. After finally finding the beginning of the route, the rock was wet and spirits low. We decided to head back and comfort ourselves with a local brew.

With our hosts unavailable the next day, Jerome, a friend of S, and me decided to follow up on the recommendation to visit the Mangart, on the Slovenia side of the border. After an hour we were driving into Italy, before re-crossing the border into Slovenia. A stunning mountain route took us up hairpins and bends up to the base of the Mangart. It is a pyramid shaped limestone peak that juts out along the border. Several different paths lead to the top, via more or less complicated tracks or ferratas. But we weren’t quite ready for the summit yet, as we had the intention of climbing a route on the north side of the wall. Going back into Italy, we descended several hundred meters before starting the aptly named Ferrata italiana. Setting off, we were still worried we would find snow on the upper reaches. The itinerary kicks off with a small cave passage, where the cable passes through the rock face. Further up it traverses to the left, following a series of natural ledges. As the valley dropped away the further we advanced, we soon had a serious fall beneath us. Unlike most ferrata’s, it had a definite high mountain vibe. We could see where rock fall had smashed into the rungs, bending the steel. Arriving near the end we started to encounter some patches of snow, but were soon pulling ourselves over the edge and into the sun-light.

Making good the rift in the clouds we decided to follow the path up to the summit. Although it was a standard hiking path, it was covered in snow and ice. Thankfully there was still a steel cable in some of the steeper places and we were able to clip into these. Arriving on a large ledge, just above the north face, we started to traverse eastwards. But then the clouds started to roll back in and we only had several hours of light left. Without crampons we didn’t know how long it would take to get there and back, so I decided to call it a day.

Getting off the grey and white mountain and back into the sunlight we were greeted by the incredible autumn colours. Stopping off at a small Italian supermarket, we were able to stock up on some good food, before spending a last night with our hosts. There is so much more I’d want to do there, I’ll have to wait until next time! 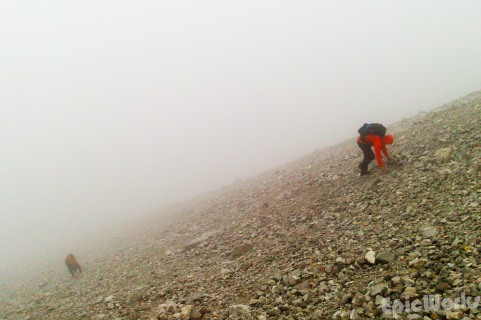 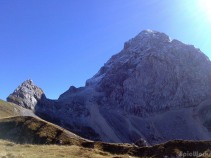 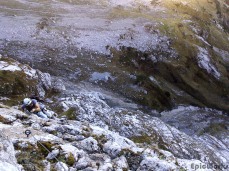 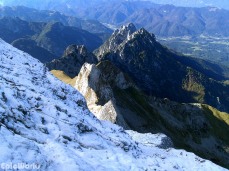 Starting to traverse in the snow 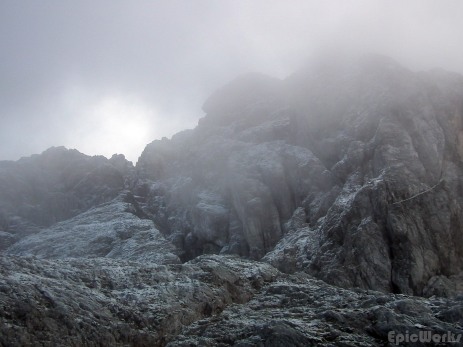 The clouds close in. Limestone and snow. 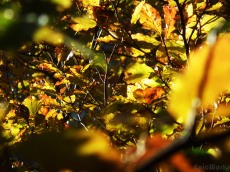 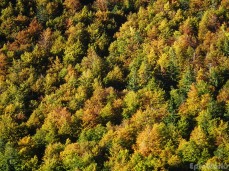 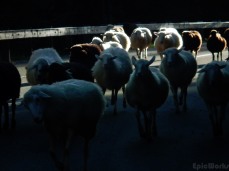 Thanks to Georg and Lionel for welcoming to their homes and providing me with such a great stay! Danke!