After two failed attempts, Jordi was back to try out some rando skiing. This time, not only where the conditions better, they were perfect. I was spending the week in Valmenier, so when J arrived on Thursday we had to make the most of the end of the week. And I already had a plan. So next day, after a late night we were heading up the valley, leaving the chalet behind, destination Thabor. At 3178, it’s a classic peak, and being almost highest of the range offers an incredible view from the top. Just below there is a small chapel was built in 1951, although there is record of a previous chapel since 1487. What J didn’t know is that most people do it from the other side. Not because it’s easier. It’s just slightly shorter!
So to cut a long ski short, we climbed it! Having been training all week, I was in pretty good shape and really enjoyed the uphill, while J made a great effort considering it was his first rando. Approaching the final summit, the landscape was more than enough recompense. To the east we could see the Italian Alps, south the characteristic sharp peaks of the Ecrins scraped the sky while in the north the rounder Vanoise was clearly visible. 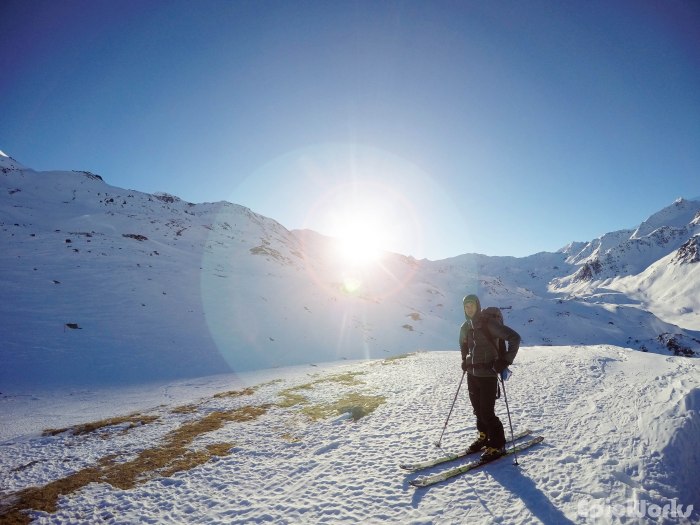 First sun! Heading towards the peak

Jordi gets into the rythm of things

The view behind and the Valmenier valley 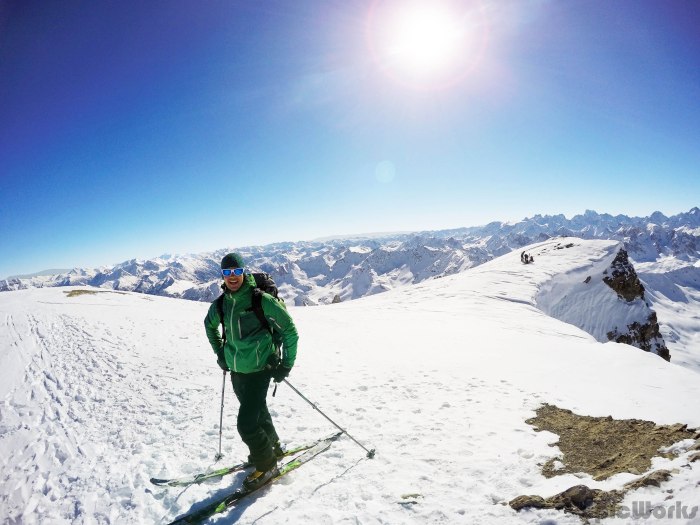 On the summit. Ecrins in the background.

On the way back we decided to take a small detour, re-climbing above the ski station. This meant we could then ski down one of the longest pistes to the base of the resort. But by this point it was dark, and rather than continue and miss the bus we decided to bite the bullet and hike to the chalet where a great meal had been prepared. Just a quick shout-out to everyone that did such a great job the whole week! (roast duck, raclette, lasagne, pancakes, Tunisian food, fondue…)

Spring skiing under a blue sky

There and back again.

Change of scenery. Change of style. Gone was the sun and the high mountains. Come was the deep powder and the forests. We were back home, and arriving around mid-day just had time to drop some of our kit and head back out again. Grabbing a bite to eat in the car, we head up into the Vercors. With a few hours of sun left we lost no time and were soon climbing through the fresh snow, which kept falling around us. Getting high enough for a good run, we turned around and made the most of the last light. It was J’s first taste of forest ski. Probably the most different from classic piste skiing, it demands quick turns and sharp reflexes. But not to worry, as there was plenty more practise coming!

The Green Goblin is back

For the next round we were off to the Chartreuse. After a perfect outing a few weeks before (see Sacred Chartreuse) it was the logical option. JB joined us and we headed to the Chartreuse Monastery. We had thought of doing the Grand and Petit Somme, followed by the west corridor, but after encountering a couple who had just been taken out by an avalanche below the col de la Ruchère we decided to stick to the forests. This was good news for J as he still needed some practice on the turns! Our decision was confirmed as we gained height and the weather worsened, meaning it was pointless to try the peaks. So instead we headed down, out wind and into the labyrinth. It was the best choice, as with poor visibility we wouldn’t have seen anything on the high mountains. JB literally flew through the trees! After a first run we turned around for another dose.

Start of the trail

It had been a great visit, and luckily we got the best of both worlds. Finally J was able to get an idea of what skiing in Grenoble is really all about!

One thought on “Best of Both”