Flicking through the tabs at work I looked at the forecast for the Nth time. Again completely different from half an hour earlier. The predictions where shifting around so much that it was impossible to know. Friday morning came and went and we had everything packed. No snow. Ominous dark clouds crept over the mountains. It poured in Grenoble. And we started driving up towards les Ecrins. Sound familiar?

To those that do not know, La Grave is a small village deep in the shadows of La Meige. It’s also one of a kind ski station. If that’s what you want to call it. One line of cable-cars take you all the way up to the edge of the glacier de La Girose (see le Rateau). From here there are no pistes, just two wide valleys that take you back down.  You can choose the steepness and difficulty you want. All under the stunning north face, with overhanging glaciers and serracs. Beautifull.

North face of la Meige looking down on us. 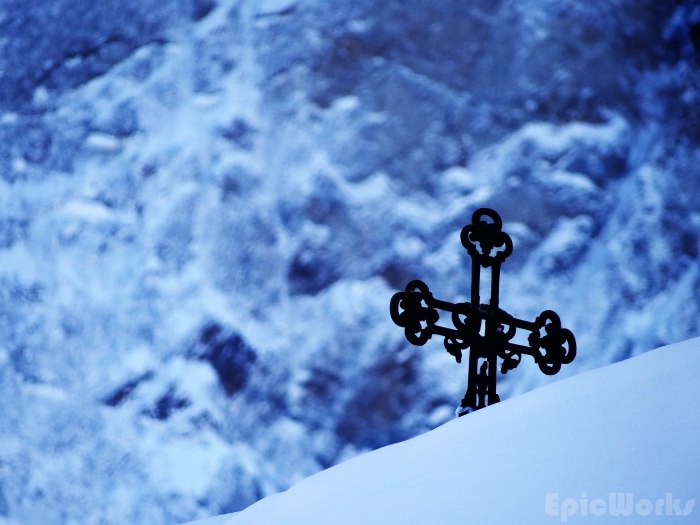 We were heading to an even smaller village just above, called les Terrasses. As we drove higher rain turned into snow and soon the countryside was white. Up and up, deeper and deeper snow by the sides of the road. When finally we took the last turning off the main road to start the twisting route before our destination even the four snow tyres started to lose traction. But with massive and perfect snowflakes falling everywhere we made. Unpacking all the stuff while looking out of the window and watching the snow accumulate was better than Christmas. And just like Christmas next day I was up before the alarm, impatient to see how many presents we had. A solid 50 cm of powder on roofs, cars and mountains was the answer. Incredible! Bouncing around the apartment getting breakfast and kit ready we tried to make plans. The big question was if La Grave was open, as avalanche risk meaning it could be closed. With everything ready we called T. who was making his way up from Grenoble and went out.

A few minutes later and we were at the bureau des guides asking what the situation was. It didn’t look good: bad visibility and an unstable snowpack meant it looked bleak. A small queue of brightly clad hopefuls stood unwavering in the cold. But word soon spread that it wasn’t to be. We needed a plan B. So with T coming up from Grenoble and the possibility of the col de Lautaret being closed during the day our only alternative was the infamous Les Deux Alps.

With T joining the group  thanks to some perfect synchronisation, we got into the cabins and made our way to the top of the glacier.  The visibility was bad, but the snow was perfect. One, two, three descents through untracked, waist deep powder. A dream come true. Waist deep. And again! The snow poured everywhere, hitting us in the face and telling us that this was a very special start to the snow season. We just wanted more.

After such and incredible day,  a good ending was needed. There is only one way to better such a day. Well there are three.  We chose raclette. And sauna. And apple pie…. With H and R joining us Le repas was a celebratory one.

Day 2 rose upon us, and this time sun came into the apartment. Looking down on the village from our vantage point we tried to make out if there was any movement coming from the cabins. Had the snowpack stabilised enough? Hoping for the best we grabbed our skis and were off. For the lucky ones this was literally out the front door. Other less fortunate members had to drive down. But in any case we were all soon looking out the old multi-coloured cabins, onto cliffs, pines and lots of snow.  The view from the top is always spectacular. Although I had had opportunity to spend some time there this summer, the landscape was transformed by the white blanket. But by that point we were thinking less of the view than the descent that awaited. 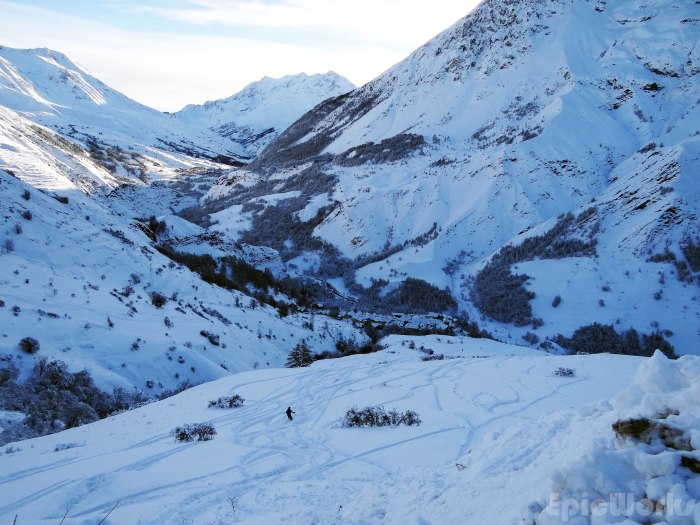 Lucky ones get a first descent from the door of the appartment.

Direct into the Vallons de la Meige,  the valley that extends down the right hand side of the mountain. This is what it should be. Burning calves and more and more snow, going down, down, before meeting the treeline that comes up to greet you. To cut a long descent short it wasn’t bad. Not bad at all. 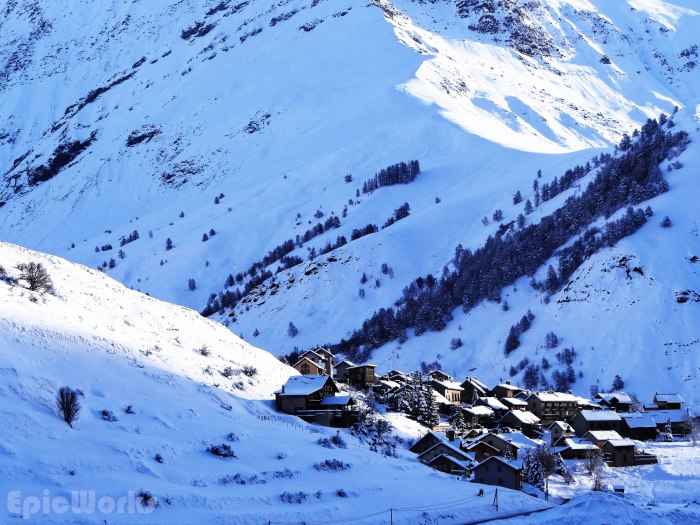 Towards the end of the day we headed of down the Vallon de Chancel. Here we met H, who had previously gone down to the bottom. At his suggestion S and I followed him into the Colouir de la Banane. As the rock faces started to fall away either side I had the feeling I had bitten of slightly more than I could chew. But just before the cliff there was the entrance to the corridor. Made impressive by the rock face of the left it is a large and not too steep descent. Reassured by this we hit the slope. H disappeared down while I made slowed and slower turns as energy levels dropped. Gradually descending, we made it to the edge of the lake before retaking the normal descent down to the cabins and the village.

Not bad, at La Grave…