Les Arêtes du Gerbier. Memories of eternal fog. Of wet rock and wind. A day spent seeing the rope disappear into nothing, only feeling the pull from an invisible climber. Arriving late at the abseil, only to get lost in the dimming light coming through the cloud that still enveloped us.

Our last experience on the ridge. The rope just disappears….

That was last time, about two years ago, when J., G., and myself had done the edge know as Les Arêtes du Gerbier in the Vercors, between col Vert and pas de l’Oeil. Having heard about the spectacular views from the top, and making use of the incredible autumn weather (when will is snow?), we decide to do a re-take of this very aesthetic route. So after a rather unsatisfactory day in the Ecrins, Sunday saw us driving towards Prélenfrey, from where a small path climbs to the beginning of the route. We were in fact going in two groups, as three and a four person teams. As we got the car park, the first thing we noticed was that yet again, we were in the fog. Having vowed not do a repeat of last times performance, we decide to hike to the beginning of the route and see the conditions there. The seven of us set off, up the steep path that zig-zags between the cliffs toward the Double-Breche, where the actual ridge starts. Like last time this meant we would be going from north to south along the edge, which is both the classic and logical way of doing it. As we gained altitude, we slowly walked out of the clouds, and the view opened out in front of us. With the white sea now below, we could spot Mont Blanc in the distance, with all the mountain ranges between silhouetted against the blue sky. This was something else!

The gloom greats us again. Not a good start! 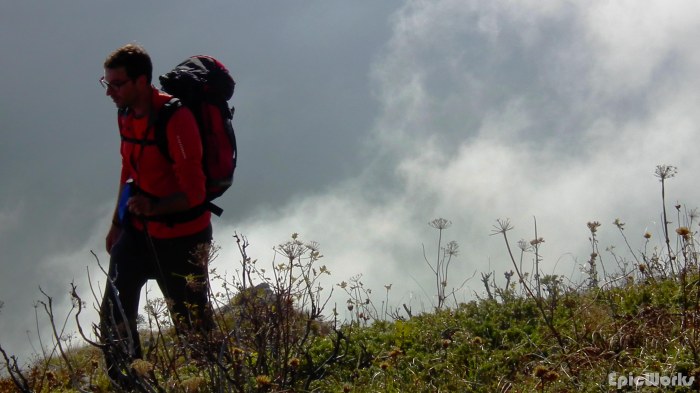 V. coming out of the clouds. 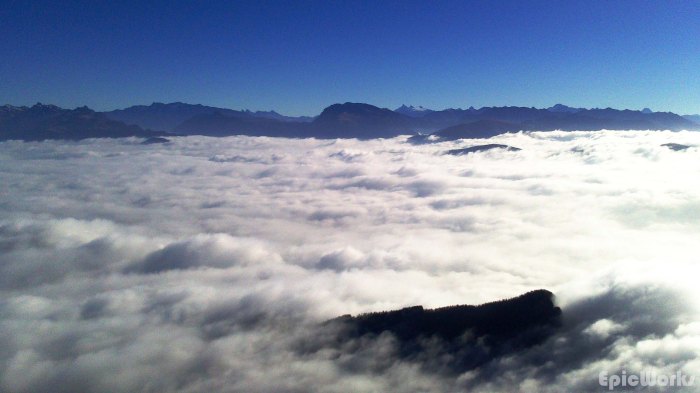 Everything is better up here. 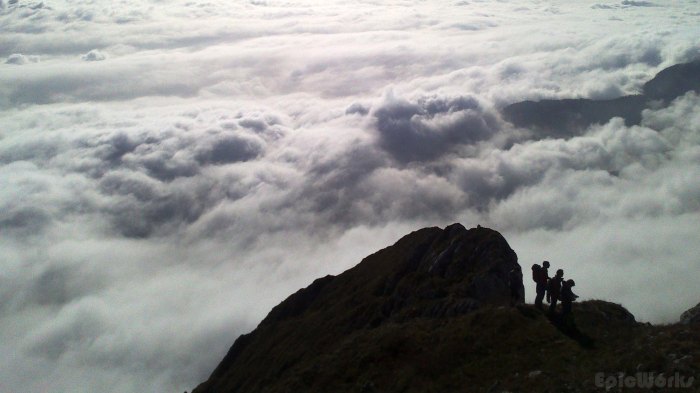 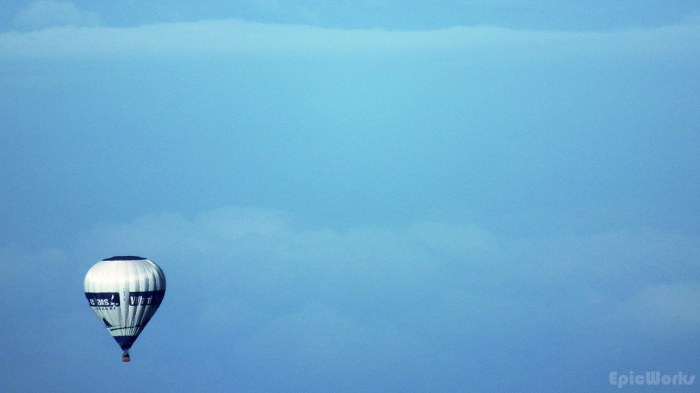 A solitary “montgolfier” rises above the Vercors plateau. 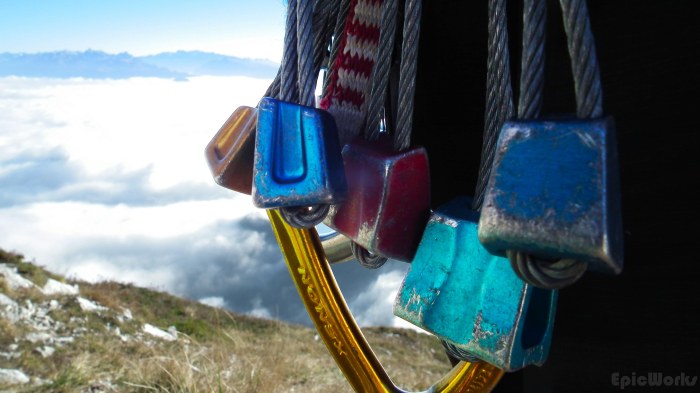 At the Breche we roped up as one team of three (J., J.B, and myself) and two other groups of two. We set off first and soon overtook another couple of climbers, whilst two of ours decided to drop out. After a first very short climb, most of the way is horizontal, weaving in and out of the rocks. The limestone is incredibly abrasive, giving extra-good hand-holds. On our left the cliffs dropped all the way down into the clouds, whereas on our right we had the Vercors plateau. Continuing forward we went through the different sections; Le razoir (the razor blade), Le peigne (the comb), etc… Although sharp in some places, there are no technically hard passes, meaning we could enjoy the view and sunshine. Far off in front, we could see Mont-Aiguille (see last week’s ascent) sticking out of the clouds.  We progressed at a good pace, with the other two teams not too far behind. It was really enjoyable to be out in the fresh autumn air with such an incredible vision of all the south Alps.

Behind us, V. is surveying the situation.

J.B. checking out the next move. 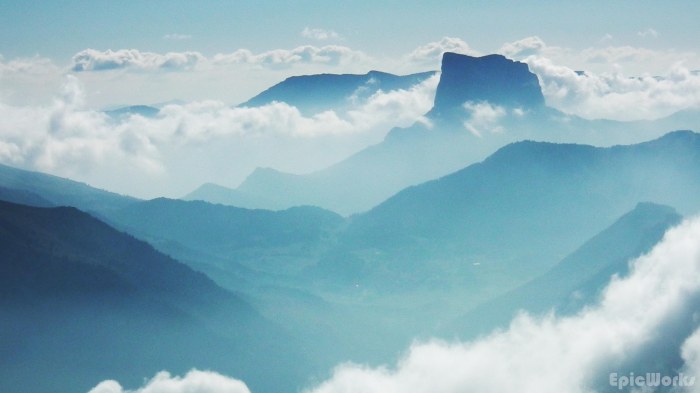 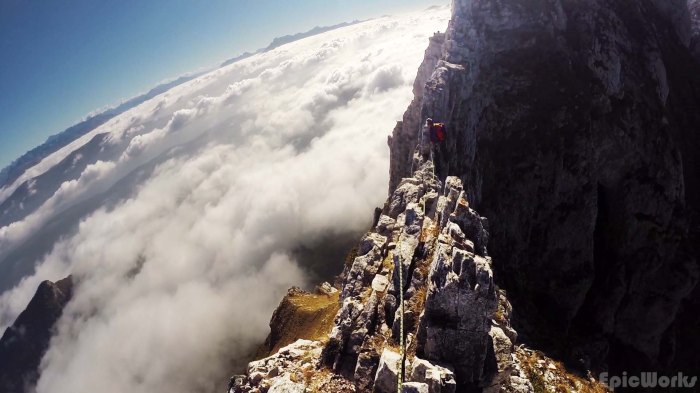 Almost at the top. Walking the tight-rope!

At one point we had a choice between a small path on the right flank, followed by a short corridor, or to continue along the ridge. As we had taken the first way last time, we decided to climb the ridge. This ended being one of the harder parts, although not too bad. The other guys followed us, but V. and R. (also from our group) decided to take the path, thus overtaking them. This meant that they also almost caught up with us, and were able to stop just at the end to eat lunch all together. After admiring the view for some time, all that was left was to abseil off the end. A large rock with a couple of ropes around and a carabineer acts as a relay, followed by a 23 m drop. With slight misgivings about rock relays, I went over.

They are catching us! 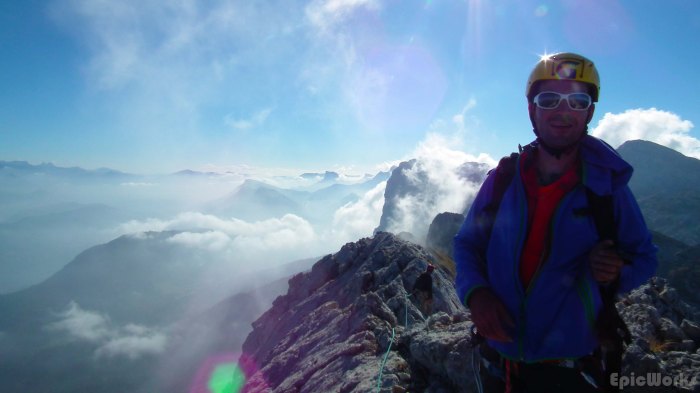 Pit-stop with a view.

Off, we go again, all together.

A small path descends to the bottom of the ridge on the west side, from where we had to hike up to the Pas de L’Oeil, from where we could descent down the car. The path of the east side is again very steep, and with the odd stone falling from above we made good time to the car. The incentive of some beers and saucisson back in Grenoble probably helped! 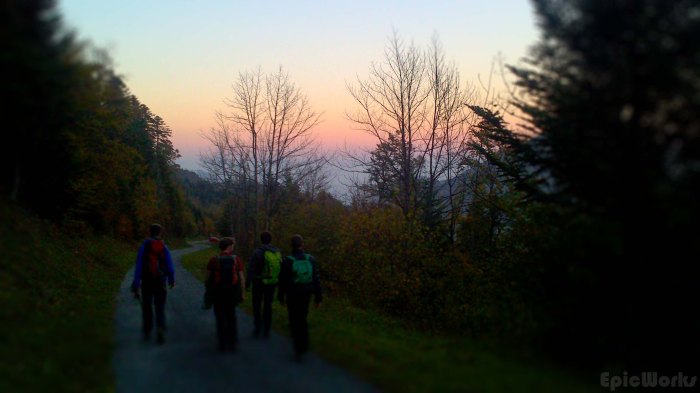 Full team, ready for our prize.