First glimmer of light through the frost… (Courtesy of Toz)

The snow clung to the trees, turning them into beautiful white sculptures.

We pushed through the last layers of fog. Above there waited a perfect landscape, seeing the sun first time in a week. It was a bright and early Saturday morning, at the beginning of February. The snow had finally arrived and it had been bleak down in the valley. But with a good forecast we were heading into the Chartreuse. Often forgotten due to its proximity to town and ease of access, its deep forests hide some of the most beautiful and secret spots of the Alps. It was Saturday, and we were going to go and discover some of them. Leaving col de Coq we took the already tracked route up to La Pravouta.  Breaking out of the fog the view took our breath away. In the time it takes most people to get to work, we were looking down on one of the most incredible sights you can ask for. Across the white, infinite sea licking at the sides of the mountain, we could see most of Belledone, stretching jaggedly from north to south. Closer, the sheer walls of the aptly named Dent de Crolles rose straight up and out of the slowly moving vapour. Only stopping to drink in the scenery we continued the crest towards the Rocher d’Arguille .

Out into the sun 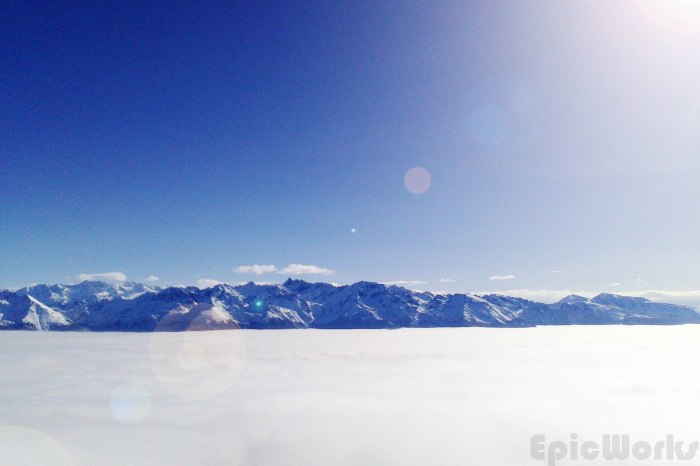 Les filles with Mont Aiguille in the background (courtesy of Toz)

Firs and the Grand Somme

Leaving everyone behind, we slid away from the sun and deeper into the snow. T. our guide for the day, had told us that only three people had been down our intended objective, and sure enough there were only three tracks, zig-zagging in between the massive trees. Following them we were able to find the doorway into the secret valley. Hidden away on the north face, it is a deep, powder-filled haven. Shielded from the sun’s rays it keeps the snow light and soft, and as we descended, the trees were completely frosted. We were flying through a magical landscape, each one choosing his or her path between the dense trees. As promised, we were discovering a new side to the Chartreuse, just on our doorstep. Going down, we slipped back into the waiting mists. 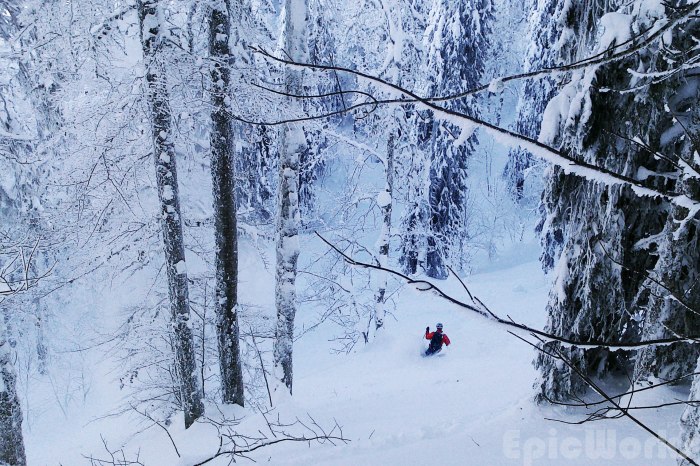 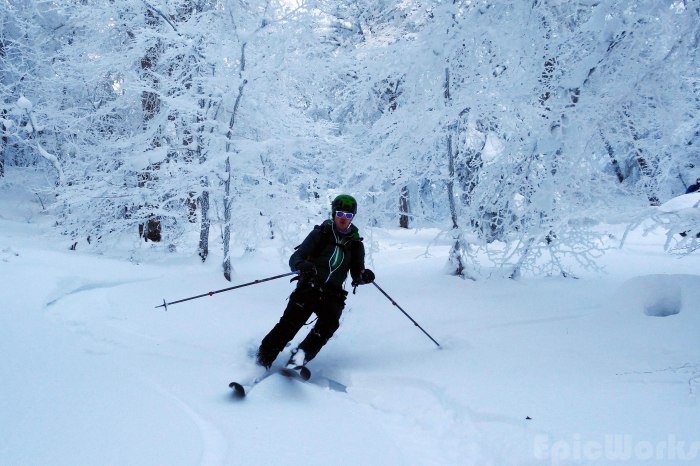 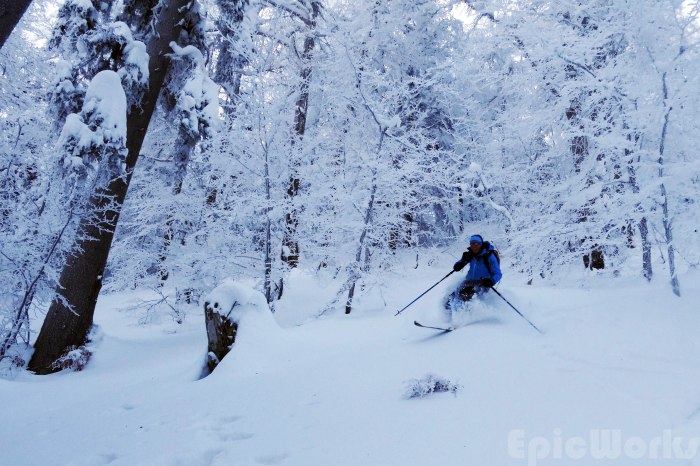 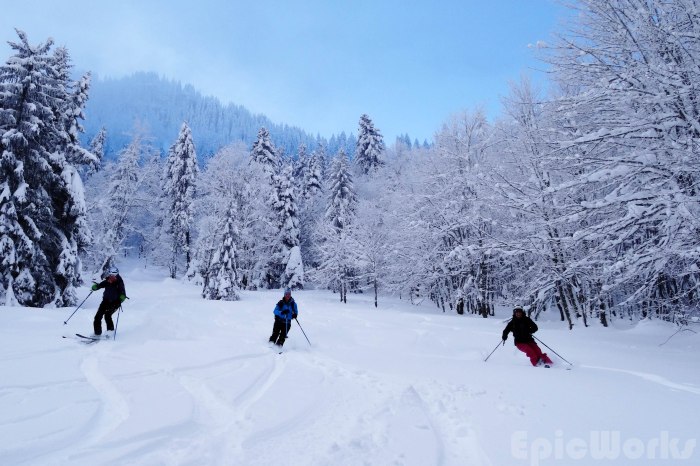 Like waking from in a dream, we were back in the world of cars and other people. But not for too long. Hiking up through le col des Ayes, of bad avalanche reputation, we doubled our morning’s tracks up La Pravouta. Picnicking with a view, we set our sights on the next objective, due south. Although by now others had ventured through the forests we were taken down the less well known variants, going through untracked gulleys. 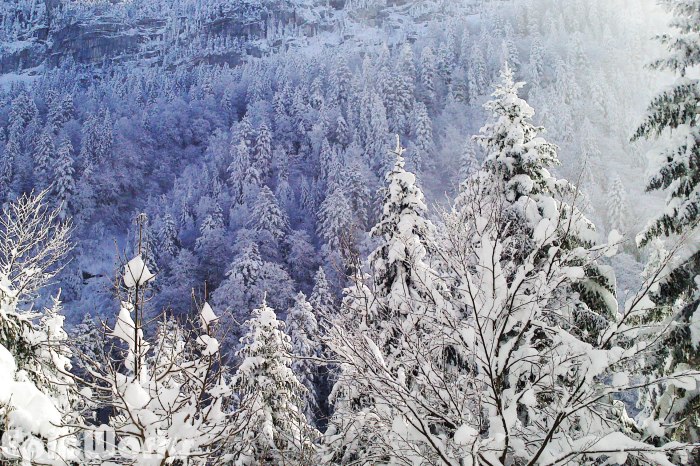 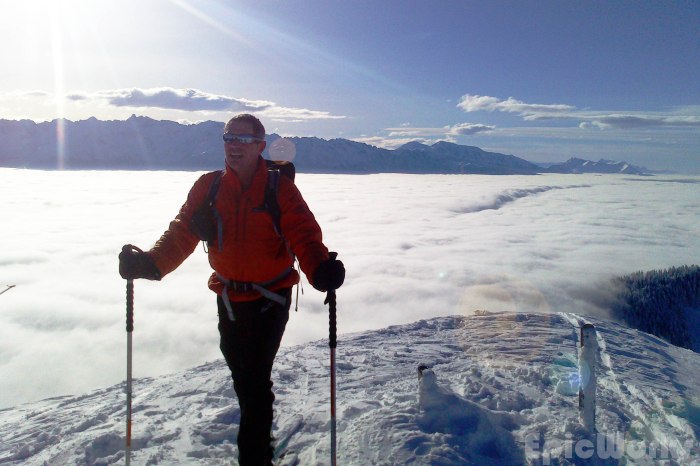 Maude is ready for the picnic

As we made the third climb through the fog, the sun’s beams played with the fir needles, making beautiful figures against the suspended water vapour. And like each time, the sensation of breaking out of the mists and suddenly seeing afar was just as magical.  Getting to the top of Bec Charvet, we pulled the skins off and skied down the south-west face. A first open slope gave way to denser forest, and again we were cutting in and out of the oaks, beeches and evergreens. 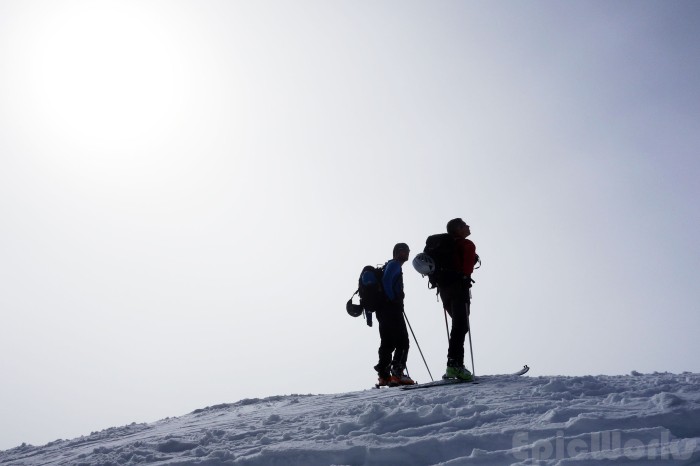 Catching our breath… (Courtesy of S.Stemmer)

Heading back, we gave in to one last climb. Retaking our tracks up we made the most of the deep powder on the north face of the Bec. Still in the mist and not having seen the sun it was probably the best powder of the day!
It goes to show you don’t need to go far to find the best most beautiful spots it the Alps, or the most denivelé, as after all the climbs we had done well over 2000 metres of vertical.

So when the snow has stopped falling, and you want to enjoy something a bit special, you can always give the Sacred Chartreuse a visit… 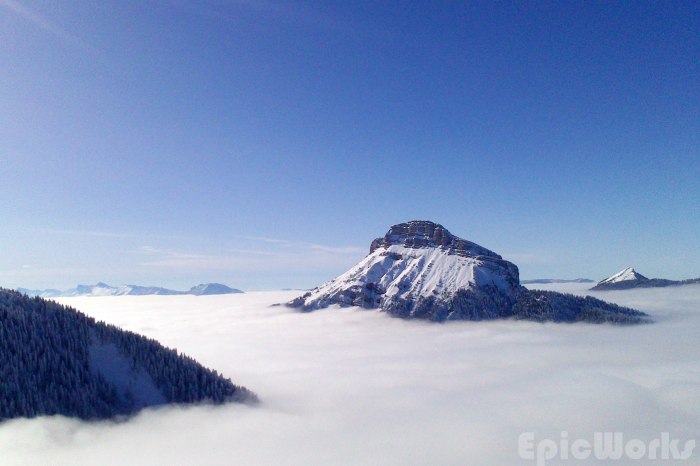