La Traversata dei Re Magi is an annual ski touring event that takes place between Valfrejus on the French side of the Alps, and the valley of Bardonneccia on the Italian one. There are two itineraries from start to finish, the longest one being just over 22 km and with a height gain of +1000 m. The tour finishes at the refuge des Rois Mages, which gives the name to the event and is where the participants can rest and have lunch. 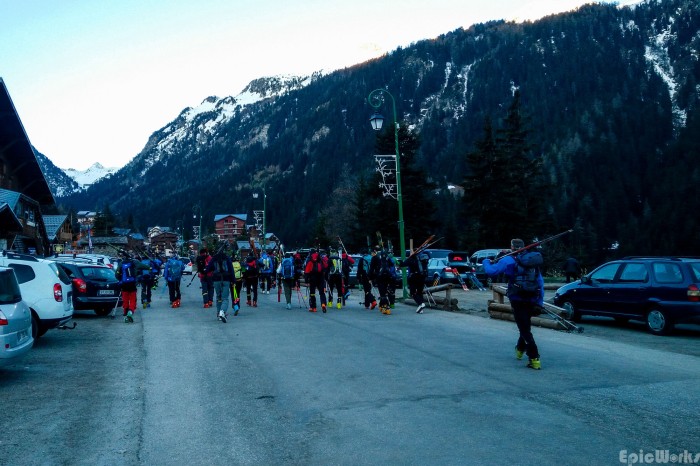 Who are all these people and where are they off too?

If we had known all this, Kike and I would have been much less surprised to find a hoard of skiers on what we were expecting to be a quiet parking lot. Congratulating ourselves for having chosen the best snow conditions (why else would there be so many people?) we soon found out otherwise. We were presented with a dilemma: to stick to our original plan and ski up the Cime du Grand Vallon, or to try and catch up with the group that was leaving at that very moment and participate in an unknown adventure. And as improvisation is the name of the game, there wasn’t too much to think about!  We were soon  pulling our gear out of the car and paying the subscription fee. Having been told we really must hurry to catch the cable car and the start of the traverse, we were soon running with all our kit, while I half-choked on one of the croissants that had been kindly offered to us by the organisers. Already sweating, we clambered into the cable car and realized we were still carrying ice-axes, crampons and all the other stuff you don’t really need for a route where the only important objective is to get to the end on time. During the ascent, we quickly prepared our stuff and were almost ready when we reached the top of the slopes.

The sun was just starting to rise, and we had managed to not be the last. The first part consisted in descending the frozen slopes, all the way to the edge of the resort. Being almost on our own we didn’t have to worry about hitting anyone on the icy snow, and we started to catch up with some of the other participants. From the bottom it was time to skin up and start the first climb: a short slope that took us into a long, relatively flat valley. At the end of this we could just make out the refuge du Thabor, where the path split in two. Set beneath the Pic du Thabor (skied with J in Best of Both back in 2015), I’d never seen this side of the mountain. We stopped at the refuge for some tea and cake, and as we had made it before the cut-off time were able to choose the longer of the two tours. The next section was a nice zigzagging climb up to an aesthetic arête which we followed. There were beautiful views on both sides and the Thabor in front of us. Having taken off our skis for a short steep section,  at the end we went back into descent mode and made the most of the perfect spring snow down into the valley. It ha hardened overnight and had only just started to soften, meaning there was a nice layer of slush on a firm base. 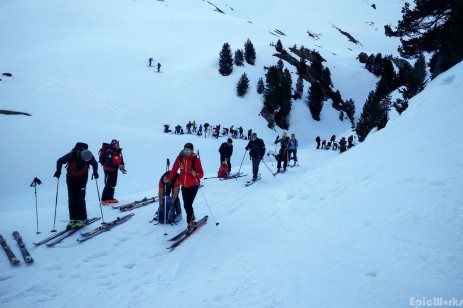 The first pause, where we caught up with part of the group and put our skins on. 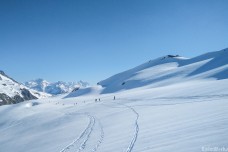 Across the valley, towards the Thabor 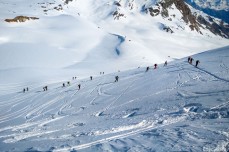 After a piece of cake and tea, we start to zig zag up again. 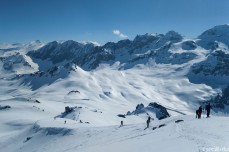 Aproaching the ridge, the landscape on both sides is breathtaking 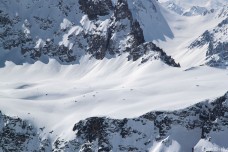 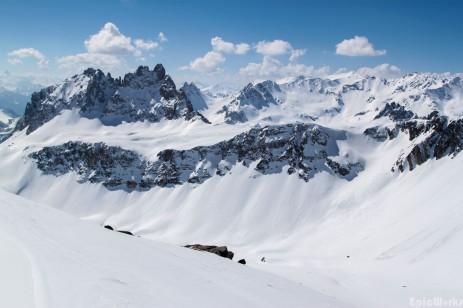 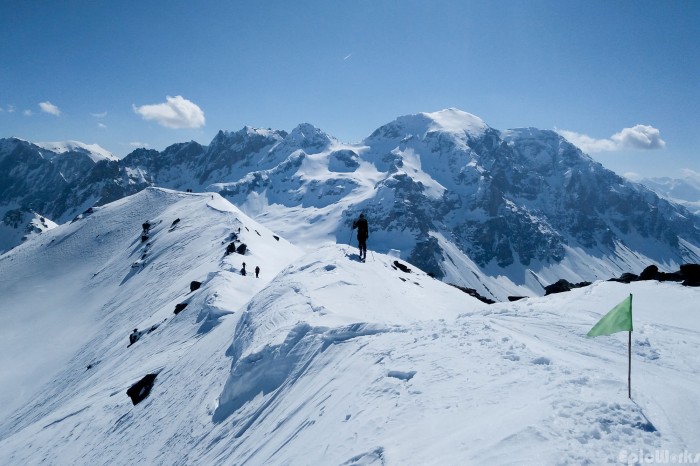 The arète above the refuge du Thabor with Roche Bernaud behind

It was starting to get hot, and the last climb was long if not too steep. We put on our skins again and started up. Kike was running out of steam, and we took it quite easy. Although we had not done too much uphill, the distance was starting to tell. After this last effort we only had one long descent left, which was perfectly chosen to go through a small gorge before coming down into the tree level. The snow was really too soft by then, and we had to find the best sections before it run out. Arriving at the refuge with our skis still on, we had managed to arrive in roughly the same position in which we had started out, although nobody was checking (or cared) as the most important thing was to start eating. This had been taken care of by the organisers, and we were soon sitting down for some lunch. After our coffee we hopped onto a bus which transferred us back to Valfrejus, via the tunnel beneath the Alps. 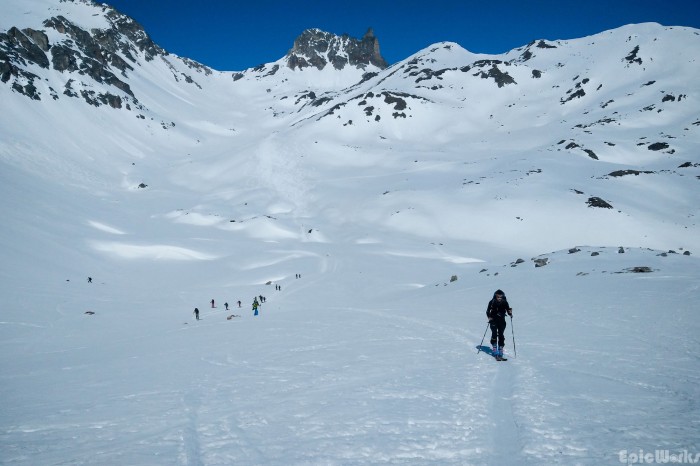 The last climb: those boots are getting heavy! 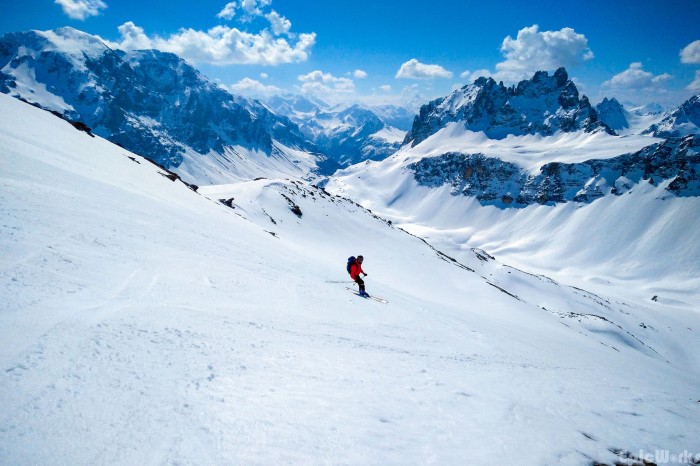 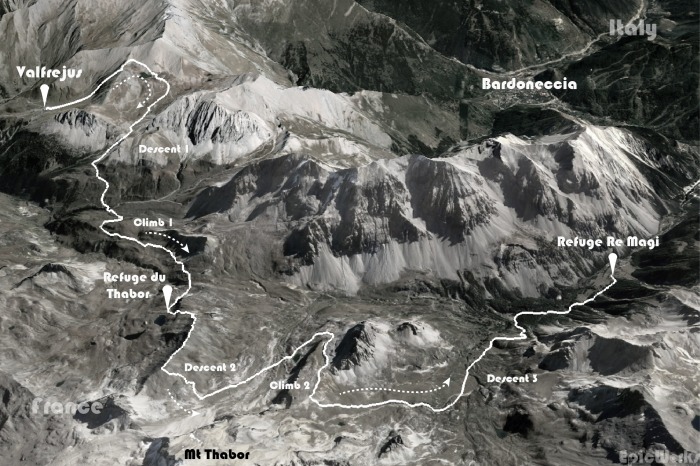 The traversé des rois Mages, from Valfrejus to The Refuge, passing beneath the Thabor. 22 km +1000m

Improvisation was once again key, making it a great day, and we would like to thank the volunteers that made it happen. By making it a one way tour you get to see so much more of the mountains, and we got some excellent Beaufort cheese thrown into the bargain. It is also a nice way to meet the other skiers on a well-chosen route. And as it is organized every year (in opposite directions), I hope we will be back next spring!