The snow had plastered the rocks white. In front of us, China. Behind us, Kyrgyzstan. And around us the infinite mountains that make up this special part of the world.

After an abundant breakfast of jam and sweet pastries we had our bags ready for the next and final part of our journey. We made our way to the town centre and the taxi drivers shouting out their destinations. A few minutes later we were in the back of an old Audi, heading back the way we had come the previous today, only this time we were going to continue straight over the Dolón pass and down all the way to Naryn, the capital of the oblast or province. As I dozed on and off, we made good progress. Once over the pass the road changes from asphalt to dirt, but our driver wasn’t impressed and continued at the same pace. Once in Naryn we quickly found the CBT office and organised our transport to Tash Rabat. As we wanted to get some hiking in that day we set out immediately. The countryside changed once again, and after a short ascent we were driving straight across a massive plain, the mountains on our left, slowly approaching us. Chatting with our driver I was just trying to imagine what it must look like in the winter, the huge expanse just covered in snow. It must be an amazing sight, and one I would like to see sooner than later. 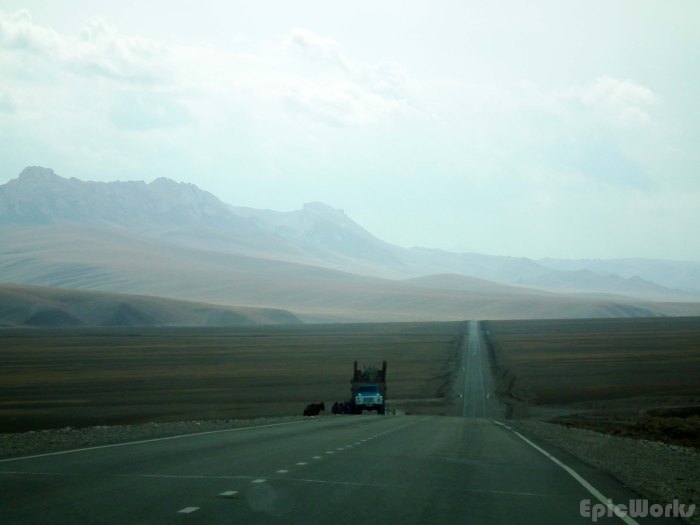 The Highway to China. The planes and the mountains.

We start to see our destination!

After another terrible road we arrived at our destination; the Tash Rabat building. It is known as a caravanserai, or way-point for the silk-road merchants, back when the long trails of animals and valuables would have made their way across half the world. Its real purpose is debated, and in reality it is now thought to have been a Nestorian monastery built in the 15th century. This would be more logical from our point of view, as it is placed at 3200 metres, right up the valley. Any passage through here would have meant going across the high passes at the end of the valley, which although practicable on foot, might not have been ideal for a caravan. It is more likely the merchants would have gone around the longer but much flatter route to and from the Torugart pass into China.  It is made up of multiple interconnected rooms, half dug into the mountain, with a small stone dome on top. Whatever it’s real purpose, it is one of the few stone buildings in a land of nomads, and therefore both interesting and unique. After looking around the interior we were ready to start up the valley. With only two days left we decided to go up the pass and then decide. 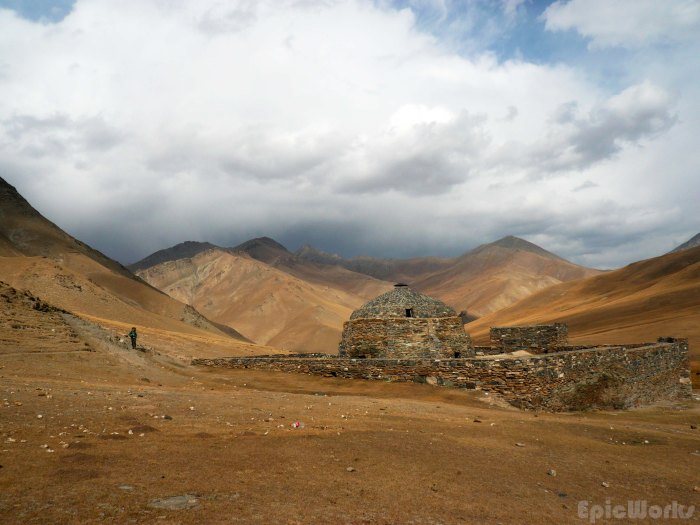 Imagining history. What happened inside these walls? 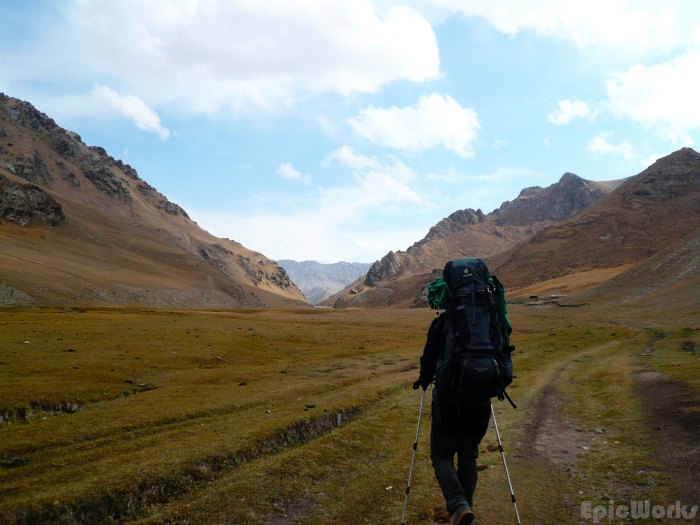 Setting off towards the high passes.

We soon left the small yurt camps behind, and were once again surrounded by mountains and the roaming cattle. The path headed straight up before twisting up and to the right but soon disappeared into the rocks and grass. As we hadn’t been able to obtain any maps of the region, we were using the Google maps topography to try and determine what looked like the most probable way. After a couple of hours the sun had disappeared behind the peaks and we had come to the end of the valley. Above us several promising cols looked down on us. It was too late to get to the top so we set up tent and got ready for bed. The initial idea was to get u before early, hike up to the pass and watch sunrise. This was the theory. In practice, upon hearing our alarm go off, we could also heard the storm and wind rattling the tent and decided sunrise could wait. A few hours later we crawled out and the mountains had had a makeover: a thin snow covering had plastered everything. This gave a beautiful, harder aspect to the rounded peaks, making us finally feel we were really just below 4000m. After a few minutes of marching up the steeper terrain we hit both the pass and an incredible view. In and out of the fog we could see far onto the other side. In the distance: China! The fact that we had just climbed over the edge made it magical. If we had just arrived by plane or bus it wouldn’t have been the same, but to look down and think we had walked to the edge of the great empire, extending forward for thousands of miles in front of us, was awe inspiring.

The mountain has changed it’s mask this morning.

Climbing up towards Tash Rabat Pass.

Victory! Just being able to see China is prize enough. 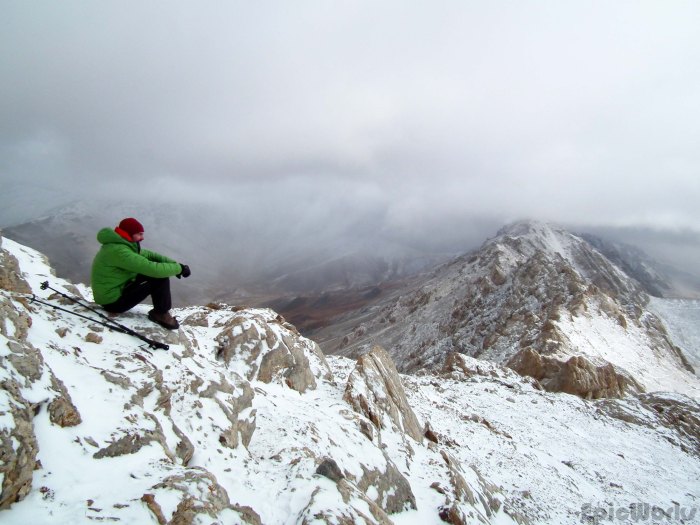 Maybe come back here with some ropes? 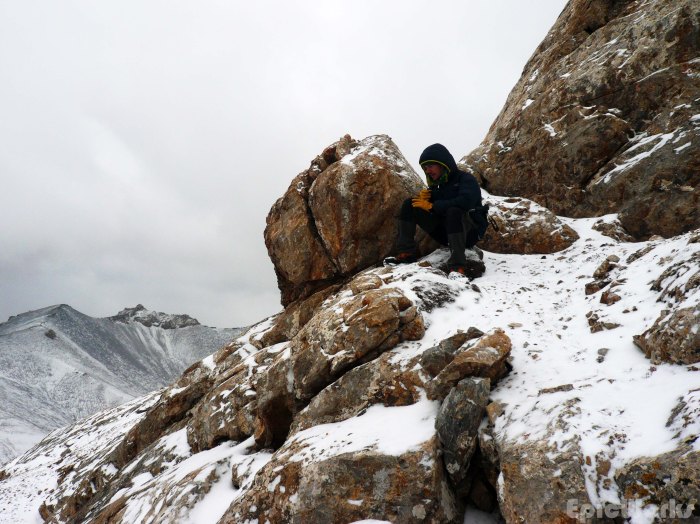 Sheltering from the wind, and admiring the view.

Looking around we could see a small peak that looked accessible, so we decided to keep going up. Leaving our bags at the base we quickly headed through the thin layer of powder snow to the top. As we neared the summit the clouds opened up a bit and we caught some glimpses of the mountains extending north-east, ever higher. Down below, Chatyr Kol Lake was reflecting the morning sun’s rays towards use, giving a white appearance and making us doubt it was frozen. As the wind increased in intensity we decided to head down, towards the lake shore. Due to the closeness to China we had been told to stick to the north side, or risk being caught without a permit. As we descended we came across a pack of yaks, huddled together against the stinging snow. The big hairy animals didn’t seem to care too much, their backs completely white. They raised their shaggy heads to watch us pass, calmly eyeing us up. These animals are native to only the Himalayan regions and some parts of Russia and Mongolia. 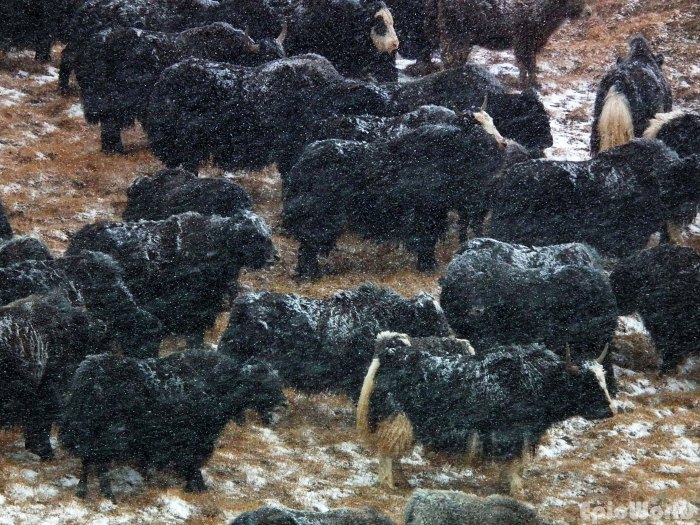 Impervious to the snow. The yaks face out the weather.

Continuing towards the lake, we had decided to head north before re-climbing up another pass to regain access to the other side of the mountain range and get back to the starting point the following day. With the lake on one side and the mountains on the other, we advanced below the clouds skimming across the sky. After several hours and a few snacks, we turned left to start to close our route, starting with the climb of the pass. Up, up we went, the sun now shinning and melting the little snow that was left. The wind was stronger, and as we neared the edge it was pulling at our clothes, pushing us backwards. By this point we had been going for quite some time, but decided to try and get a couple of peaks done. This was not be, as the slope going up to the first summit was steep and quite unstable. Realising the climb was longer that we had foreseen, and that the sun was nearing the horizon, we decided to find a suitable camp site before complete darkness. Searching for a flat spot we went lower and lower into the valley. Soon we had entered a steep gorge, between the eroded cliffs. As this was a terrible spot to set up tent we had to continue, climbing down the river. Thankfully only a small trickle of water moved amongst the stones. As the last light faded we came to an intersection with another valley and the gorge opened up a bit. We pitched our tent and started cooking our soup! 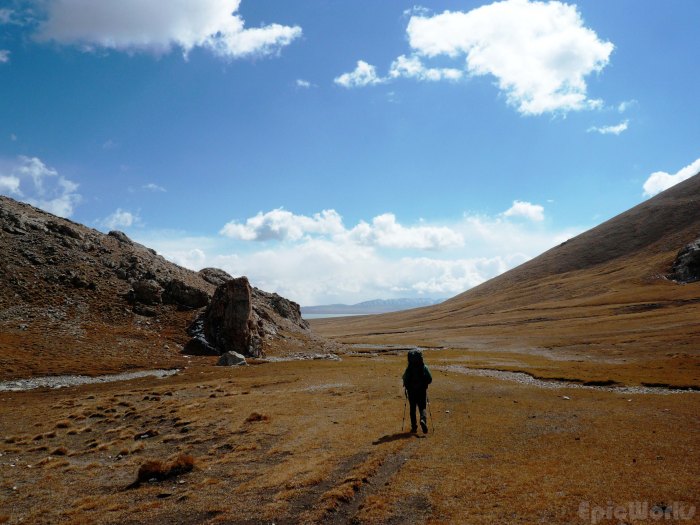 Out into the sunshine! Towards the lake.

Massive. On the left, Torugart pass into China.

Running for the pass. Some 4000s in the background. 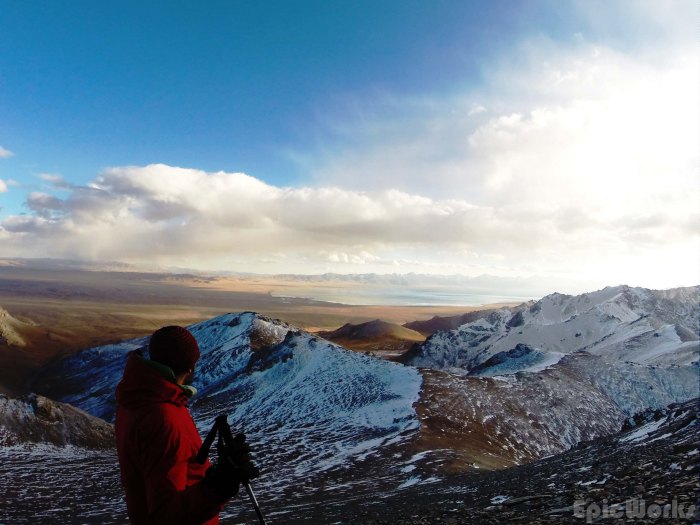 T looks down on the way we have come. 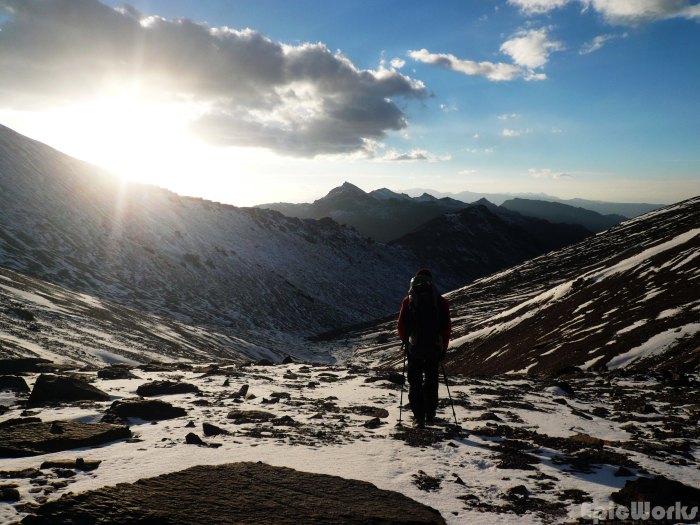 Heading down for the campsite.

Next morning all we had to do was go down the valley before backtracking a bit, go over a small pass (3700 m aprox.) and then hike down to Tash Rabat, where our taxi driver would be waiting.  Luckily the route wasn’t hard, as soon after breakfast I wasn’t feeling too good. As we left I decided I really didn’t feel perfect. After ten minutes I was positive I felt awful. We soon found ourselves back in the steep gorge, only now there was more water pouring down. Hoping we hadn’t made some terrible mistake and gotten ourselves into a two day long cul-de-sac, we kept climbing down amongst the steep stones. As I worried about getting back that day (which would also mean missing our flight), we found another valley heading up. This was our cue for the col, so we started climbing up a section of even steeper gorge. It soon flattened out, but as the water had frozen during the night, making the rocks incredibly slippery, we climbed up the bank and made our way along the grassy flanks of the mountain. By this point I was not doing too well, and had difficulties putting one foot in front of the other. Being a complete hypochondriac I was entertaining the possibility of appendicitis in this remote land. Having decided to have my appendix removed if I survived this, we set up the last hike to the pass. Halfway up I decided to sit down for a rest as I couldn’t keep going. Thomas woke me up half an hour later where I’d hit the ground in complete exhaustion. Feeling a bit better, we set off again and were soon going downhill. The landscape was truly stunning, and took my mind of the actual walking until we had made our way down to the valley we had set off from the day before. Another quick nap and a few more hours of walking and the white yurts were visible. Our driver was already waiting for us, and as I slept the whole way, we were instantly back in Naryn. Here we were put up in a home-stay by the CBT, and after the sleep and a shower I was feeling a better. Also at our home-stay, we met Mark, a Canadian who is going on a three year biking trip around the world. Heading out for a bite to eat we managed to wonder into a small restaurant, completely hidden (as always) from the outside. As we ate he told us about his crossing of China and entrance into Kyrgyzstan. Telling us he didn’t have much idea of biking, we were pretty impressed by his journey. You can follow his progress on his web page here. This travelling spirit was something we had already seen in some of the other people we had met in the country, perhaps because it is off the main backpacking trails. 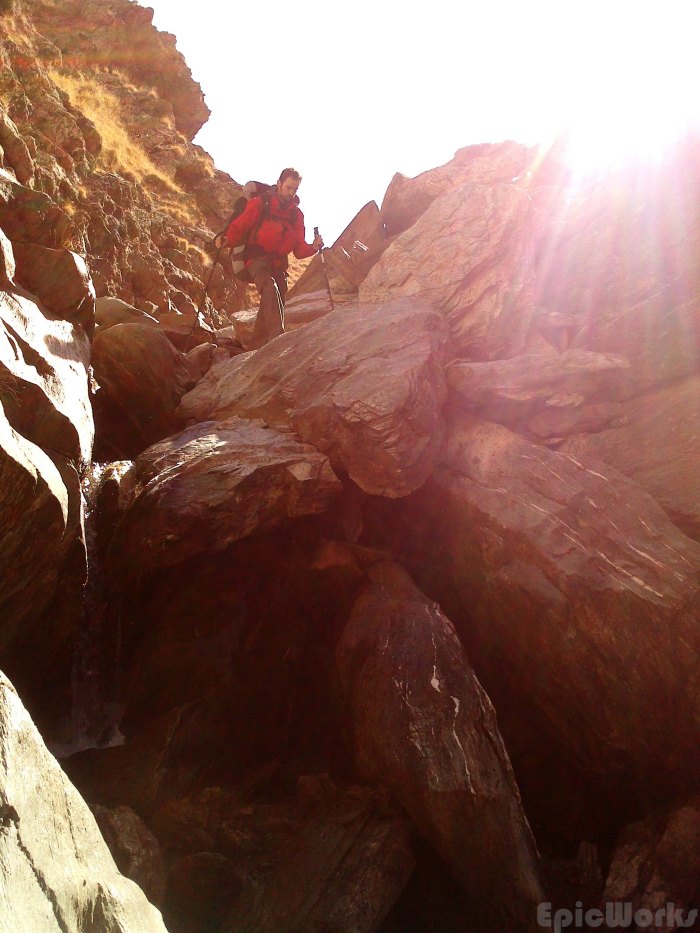 Navigating in the gorge, hoping we won’t have to turn back!

I’m underneath the pack. After climbing out of the gorge. Dead.

Next day was a long, long travel day, first via marshrutka to Bishkek, back over the Dolón pass, then by two other buses through the capital before getting to the airport. Flying via Istanbul two flights later we were in Geneva. Thankfully Jose took us out for lunch and a concert while we waited for our two hour train to Grenoble, making the return to Europe slightly more bearable.

As the carriages made their way through the green Jura, we looked at these smaller, more accessible mountains. I was already making plans for our next trip. Because the Alps will be our training ground. Because next time, next Kyrgyzstan, it will be winter in the Tien Shan!

Land of mountains. We will be back!