Time to pack our bags

Ever since our first conversation we had dreamed of travelling afar, of going out on a world-sized trip. Why? We haven’t a clear answer, in the same way it is difficult to answer why we climb mountains, ski couloirs or paddle rapids. Any response will be incomplete and only a part of the total. Some of those that read these lines will understand and will not need convincing; other will not comprehend and will be as content as we are in their more sedentary pursuits. I once heard that we travel to saturate our senses. Some do this by tasting new foods, others by stimulating their brains in museums or by simply relaxing by the beach. All these activities are essentially the same: and overdose of sensations we normally experience in small doses. In our daily life our minds will block out those repeated actions which are produced by routine, and things we have done hundreds of times will quickly fade in our memory with no lasting impression. Once an experience becomes monotone, however interesting or initially different, it becomes one experience. It is literally the first impression which will make its mark. This is where travelling becomes interesting as there are so many first experiences that it creates a long list of memorable impressions that will, hopefully, stay with us for ever.

Another reason to travel is like all other things, and one of the main reasons that push me ever forward: time is running out! Never has it been so easy to go and see the other side of the world. When William Adams reached Japan in 1600 it had taken him almost two years, fighting through the high seas*. Now it is possible in less than a day. This does not mean that the objective is to jet around due to the fact that it is possible!  Travel is more about the how than the where. But is does mean it is possible to reach further places and then spend more time there than looking at the horizon for months on end (see the previous paragraph on monotonous experiences!). The other advantage of our times is the ease to enter most countries. Historically, lots of territories where closed or dangerous to foreigners. And although difficulty is the essence of adventure, there are certain barriers that cannot be overcome by the individual. This current state of affairs is an incredible opportunity and therefore must be seized. We cannot predict the future, but can envisage multiple scenarios which compound the argument of making the most of things now. In a worst case scenario, political strife or the limitation of resources could put an end to such open transit from tip to tip of the globe. On the other hand, if things stay the same or continue to evolve in a similar fashion, travel will become easier. But this is the other side of the coin: globalisation is slowly removing many of the reasons that make travel so interesting in the first place. There will always be things to see, but the intrinsic culture and local idiosyncrasies are eroded away. This continuous process has always existed, but is speeding up. So if we want to glimpse those differences that make each place special, now is the best time.

These ideas are the positive force that pushes us to get up and go. To explore and forsake our home comforts. Having enjoyed the last years in the French Alps, we can hardly say we are running away from a life of grinding toil. Interesting jobs, great friends and colleagues and time to spend in the outdoors weighed the scales the other way. But it’s now or never!

To paddle or pedal?

How to get around all these new and wonderful places? The how is of course as important as the why and merited further consideration . Rather than  being tied to the grid of public transport and to forsake the cost and complications of hiring motorised vehicles, we decided to centre our travels around two activities that we love and give us the freedom to go (almost) everywhere: cycling and paddling. Both modes of locomotion allow one to carry the necessary items such as food and shelter, making it possible to travel independently. As mentioned above, we already live in a globalised world. This is much more apparent in big cities where international brands and franchises have displaced local services. Like importing our digital settings, we can immediately feel at home anywhere we go. The experience becomes easier, but also more uniform.  Which is why by taking the small roads, getting off the city-hopping grid and finding-oneself is some unexpected destination for the night is more refreshing.

Paddling the east coast of Sardinia

etting up camp during our cycle along the midi canal

Pedal the plateau in Tibet

Over the last few years we have made multiple trips together using these nomadic methods, either together (Midi Canal, Sardinia) or on my own (Lofoten, Canada, the Balkans).This meant that we have the basic skill-set and know-how to attempt something more ambitious. We decided to use bikes equipped with touring panniers for moving on land. For the paddling part we would be split between rivers and the ocean. For the first we would use versatile packrafts, which can easily be carried. For the sea, long touring kayaks will be our transport of choice.

Discussing our future route, we struck on Japan as our first destination. The land of the rising sun would be an auspicious place to start a year of travels. Famous for its roads and beautiful scenery it would also be a cultural shock to wake us up in the early part of our travels.

From Japan we will be heading south east, through South Korean and then China. It will be the discovery of the Far East with all its oriental appeal. The word itself exudes unknown and mysterious places. Of course, gone are the times of the first travellers, but in their place are incredibly interesting societies, ranging from the Japanese rediscovery and third revolution, to Chinese industrialisation and emergence onto the world stage of technological firsts.  As we continue ever south we will approach the second part of our travels, which has mutated into the Secret Nam Expedition. 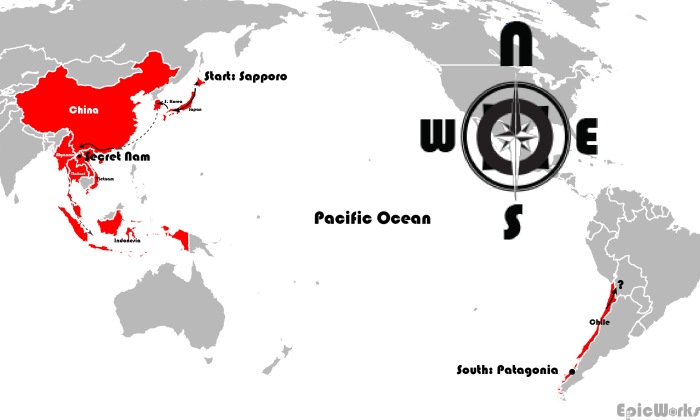 Our tentative itinerary around the pacific rim. The countries we plan to visit are highlighted in red. Due to the improvisations of travel, these may indeed change over the course of the trip!

For the next chapter we will have a definite goal: to explore the heritage of the Hmong hill-tribes in southern China and Northern Laos. We will be aiming to arrive in Laos by mid-October, approaching by bike from China after the monsoon. The north of Laos is a mountainous region covered with deep and sometimes impenetrable forests, where rivers follow tortuous itineraries down to the mighty Mekong. It is also home to the Hmong people, an ethnic group that settled there a couple of hundred years ago. In more recent times the Hmong were caught up in the geopolitical conflicts of the second half of the 20th century. Trained as irregular troops by the French before leaving Indochina, many fought and died during the “Secret War”, a proxy driven struggle between the cold-war super-powers.  With the fall of the monarchy and removal of American aid, the Hmong faced persecution and many immigrated to the United States and France. Amongst them was Sandie’s father. With him a community of Hmong have integrated Western society keeping many of their customs and traditions. It is these immaterial treasures that we wish to discover in the land where they developed, and document the progressive changes that are modelling the country in the 21st century. 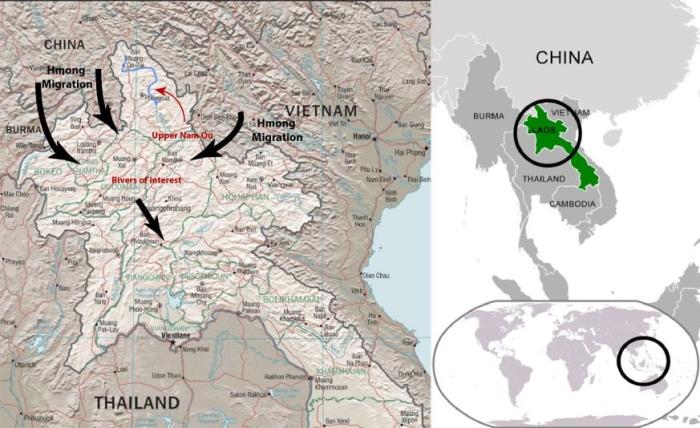 The north in Laos is both the land of the Hmong hill-tribes and multiple river networks. The construction of multiple dams is changing the landscape rapidly.

Nam in Laotian means water or river, and the map of Laos shows that it is a country well-endowed with a complex pattern of waterways. These were of course traditionally used as a means of transport between villages separated by the dense forests. Their importance is still considerable, but with the extension of road networks, like elsewhere in the world, their relative importance has dropped. Another impediment to water travel is ever increasing presence of hydroelectric dams. In our search to encounter Hmong villages we will be descending the river instead of the road, thus allowing us to reach more isolated destinations. It will be time to switch from pedal to paddle. As mentioned above, the building of new dams is radically changing the landscape and ecosystems. To advance down the river we will use packrafts due to their versatility on both flat and rough water. They can then be rolled up and carried inland in our quest to visit several of the villages on our descent of the northern water-ways. We will document the river’s potential and experience the changes for ourselves. So far we are working on viable itineraries depending on dam construction and feasibility of the rivers themselves. We are also networking with locals to establish interviews and information about the terrain. So far few reports of packrafting in northern Laos are available.

It is fitting that we should start in the North, as this is the way that the Hmong originally entered Laos and slowly moved south to the central plains. We hope to follow this broader migration by bike before swapping road for river. This trip will be the occasion to document the local population and discover their heritage as well as determine their outlook on the changes that are taking place in the country. The construction of dams for example will be an interesting topic to discuss (amongst others). The positive aspects such as energetic autonomy for a poor region need to be evaluated in terms of the price imposed on the landscape and destruction of societies and wild-life. This in turn will be compared to the opinions of those that emigrated from their homeland. We hope to shed some light on this relatively forgotten episode of recent history and put it into a modern context.

Laos is well known for its limestone caves than can contain entire river sections. Rob tests his packraft in the dark in an Alpine cave some months before departure.

After our project in Laos we wil be spending some time in South-East Asia before a short intermission. By then it will be winter. Snow will be falling on the Alps, but hopefully it will be good weather in South Patagonia and the perfect moment for some sea kayaking between the wild fjords. But those routes still need to be imagined…. 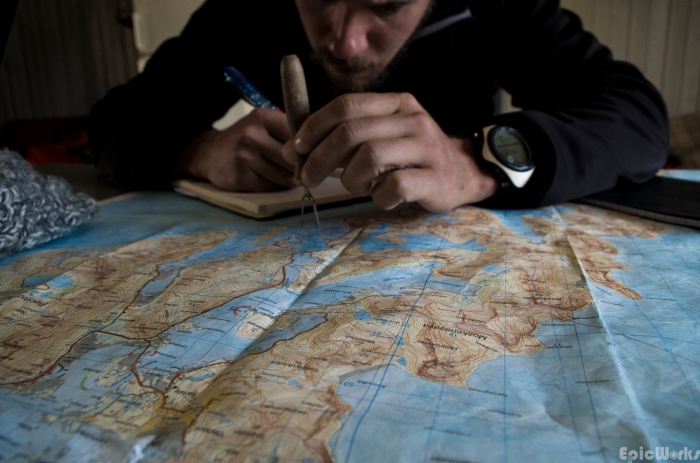 One step of the calliper, a hundred pulls of the paddle

* Adams went on to be known as Miura Anjin and become an advisor of the Tokugawa shogun. The character Anjin-san is losely based on him in James Clavell´s epic novel Shōgun, which is an interesting fiction that portrays a historical Japan and describes the cultural shock between European sailors and samurai.

3 thoughts on “Pedal to Paddle: The Project”