The desire to cycle along the Canal du Midi had been with me since my student days in Toulouse, when I lived on campus. Leaving my little dorm, I would go running along its beautiful path, beneath the plane trees towards Castanet-Tolosan. It was also our route back from town on a late night out, often sitting two to a bike. Seeing it stretch off into the distance had made me want to follow it all the way to the sea. It was built in the 17th century under the guidance of Pierre-Paul Riquet and connects the Garonne in Toulouse with the Mediterranean via the Étang du Thau (which is a great for kite surfing! – see here). It took over 20 years and was excavated by hand labour. The crucial part of the project was to redirect water from the Montagne Noir to fill the canal and make the project viable. By connecting Toulouse to the sea, and later via the canal de Garonne with Bordeaux, it improved transport across the region dramatically and meant that French ships no longer had to sail around the dangerous Iberian peninsula.

Down the canal of history

Having left Grenoble the night before, we woke up next to the canal under a blue sky. The poppies were waving in a light breeze. We loaded up our panniers and set off. We would be going towards Toulouse, but had not defined any particular path or timetable, meaning we were free to explore the region’s many wonderful sights. After a few minutes we passed through Colombiers, a pretty village with a small harbour giving onto the canal. From there we set off along the side path, overtaking the sluggish house boats that moved lazily along. We would be cycling along the recently formed region of Occitanie, made up of the historical regions Languedoc-Roussillon and Midi-Pyrenees. Both toponyms Occitanie and Languedoc stem from the word oc, which mean yes in old French. It is a region with a rich past, dating far back into prehistory and early history. Roman presence was well established, linking Hispania to Italy, with a transport hub at Narbonne. After the barbarian invasions it slowly came under the dominion of the counts of Toulose, the rule of which extended to roughly the same area as present day Occitanie. 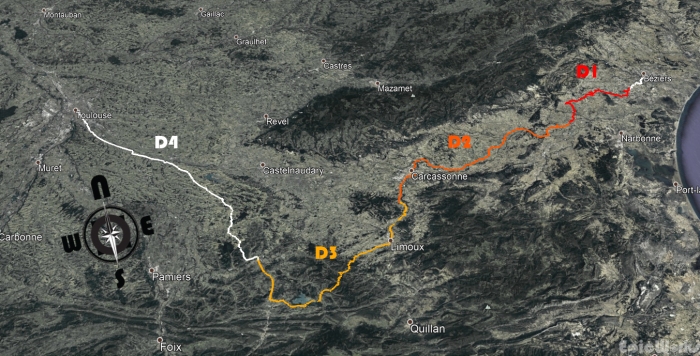 Our itinerary from Colombiers to Toulouse

We hadn’t gone far before we were confronted by the historical remains of past civilisations. Not far from Colombiers is a small hill, where the ruins of a small Gallic town sits atop its strategic position. We did not visit the interior, but from the mound were able to look down on the strange Étang the Montady, a lagoon drained in the 13th century using a radial pattern. From there we set off again, mostly following the edge of the canal and passing through several pretty villages. Coming across a field with five horses we were entertained by their energetic games, chasing each other. A few hours later, as the end of the day was nearing we found a quiet field and set up out tent. Enjoying the evening colours we said goodnight to a first day on the canal.

Poppies in the sun 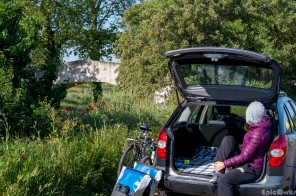 Getting ready after our first night

A land of wine 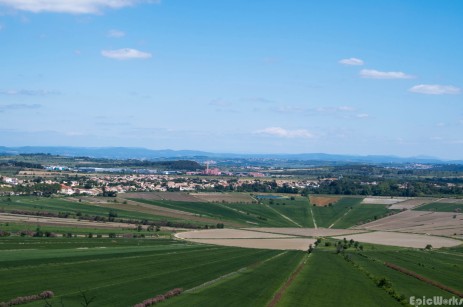 Sandie rides along the canal 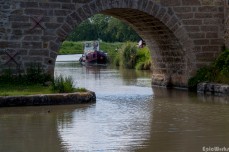 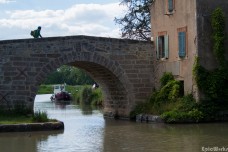 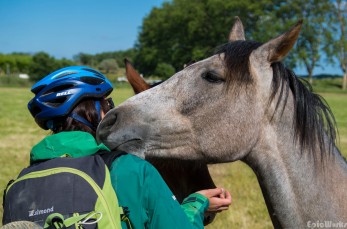 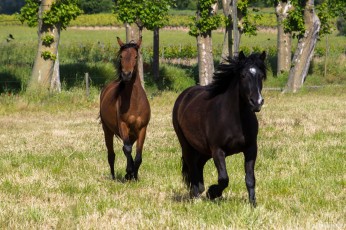 Goodbye to our new friends

On the path again

Camp 1, next to the canal 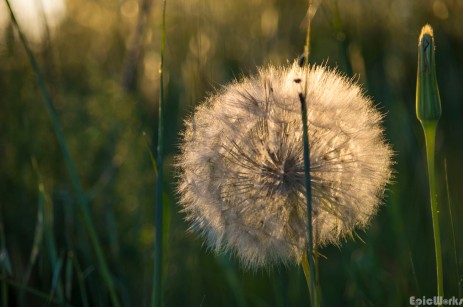 Happy to be on the move.

Next morning it was fresher, and we could see the snow-capped peaks of the Pyrenees off in the distance. Memories of my first hikes in the foothills of the Ariège made me want to get closer to them. But for the time being we continued along the watercourse and the lines of yellow irises. It was Pierre-Paul Riquet himself who had originally ordered the bulbs to be planted and thus stabilise the earth at the water’s edge.

Following the path we soon came to one of the locks that allow the barges to rise or descend from their respective pond. To let a boat down the lock is filled with water. This is done by opening small traps at the base of the gates. By only allowing the water through a small opening in the middle, the gates can withstand the force flowing through.  Once the higher level is reached the boat can slowly slide through. The gates being the tightest part of the canal, there is hardly any room to spare. The operation is then repeated again with the second pair of gates and the craft can continue its journey. 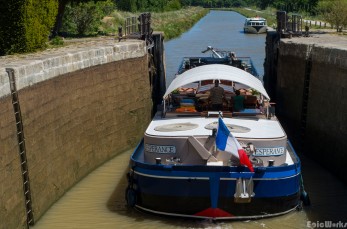 The region we were cycling through is known nowadays as Pays Cathare, in reference to the Cathars, a Christian gnostic (dualist) sect that broke with the Catholic Church and was influential between the 12th and 14th centuries. Calling themselves Les bons homes or good men, they protested against the corruption of the catholic establishment and led simple, ascetic lives. Coupled to political influence and power struggles between the different feudal factions, the Albigensian Crusade was launched by the pope to quash them entirely. Over several campaigns, including the siege of Carcassone or the battle of Muret, where Peter the Second of Aragon was killed, the crusaders showed little mercy. Infamous episodes included the massacre of Beziers, where the execution of both Catholics and Cathars was authorised on the grounds that “God would recognise his own” or the burning after the siege of Montsegur. When asked whether they preferred to convert or burn at the stake more than two hundred captives perished in the flames. There is a long distance hiking trail that connects Montsegur with the Catalan Pyrenees called el Camí dels bons homes (the path of the good men) that follows their exile into the lands of the Count of Barcelona.

In the afternoon we started to approach Carcassone and its famous citadel. I think my first memories of France are the fairy-tale spiked towers and huge walls during a weekend trip with my parents. I’ve since been back on multiple ocasions over the years. This time, being early in the year, it was relatively empty and we had a quick walk through the cobbled streets. After a glass of wine we decided to find a place to sleep and headed out into the countryside, breaking away from the canal. We arrived in Preixan, a little village know as a circulade. The term was coined by the architect Kryztof Pawloski, and the neologism serves to attract tourism to the area in a similar way to the use of the term pays cathare. Traditionally called villages ronds or round villages, the simple states the obvious: little villages where all the streets are organised in a concentric fashion around the central church. We stayed the nigh in a lovely little hostel run by a British couple.

For our third day on the road we continued to leave the plains behind and head into the Ariège, a wild and beautiful region. On the frontier between Spain, Andorra and France it bristles with castles and history, remaining unspoilt. Following a perfect road between vineyards indicated by our hosts, we soon arrived in Limoux. From there we continued up slightly steeper roads and into the backcountry. After climbing up along the D620 we came down onto Saint Benoit, where we shared (on Sandie’s insistence) our lunch with a friendly cat. A second climb took us over to Chalabre and the Lac de Montbel, which can be crossed via a little landbridge. From there we set off towards Mirepoix, but not before being completely soaked by a violent storm. Standing under someone’s front porch we waited out the worst of the downpour before getting on our way. Mirepoix was empty, with everyone hiding behind steamed up windows looking out into the bleak weather. We joined them. Feeling better, we summed up the courage and finally left the comfort of the bar. After searching around we found a place to pitch the tent and were soon asleep… 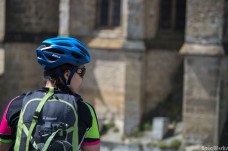 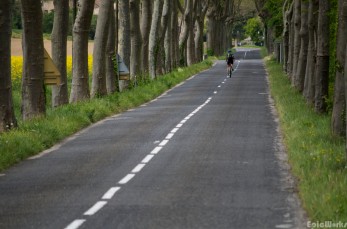 Our final day we awoke to see the snowline much closer. We packed away the soaking tent and went back into town for a coffee and to check out the market. We had to reach Toulouse to catch our train, and as luck would have it, a steady head-wind had started to blow, following the west-east direction of the Pyrenees. We battled it out all morning, taking it in turns to make headway. Stopping for lunch we realised we were running out of time and had to keep the pace up. We hastened on, not stopping. 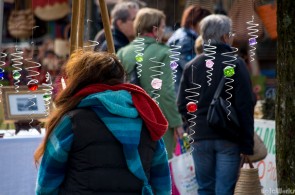 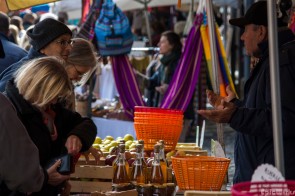 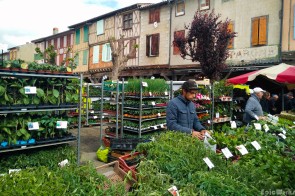 At some point during the ride we must have passed not far from the Seuil de Narouze, the highest part of the Canal, where water flows down to Toulouse on one side and the Mediterranean on the other. Unfortunately the gradient is all but noticeable, and with the head-wind unbaiting, our race against the clock continued. Past Castanet, past Ramonville, the university campus and into the centre of Toulouse all the way to the station, it stirred many memories. Arriving with a few minutes to spare, we carried our bikes down the stairs and up onto the platform. We had made it! Unfortunately, back in the day, the canal had not been so successful and the competition between water transport and railway had been one sided. In the years to come after the building of the line in the late 1800s, commerce via the Midi was halved. This gradually gave way to the mostly touristic use to which it is used nowadays.

Looking out of the window, following a path almost parallel to the great water course we had followed, we were treated to flashes of the previous days, like a rewinding film. Glimpses of Carcassone, an unnamed path or the Etang the Montady  was our little tale, enclosed in the vast history of the region. Thankfully it was not quite over. Arriving in Beziers (of Albigensian fame) we clambered back onto our bikes to make it back to our starting point in Colombiers. It was only fitting to follow the canal along the last few kilometres, which we did under the beautiful fading sun of a spring afternoon.

Midi means mid-day in French, and is also the colloquial name given to the south of France, due to the good weather and plentiful sun. It is therefore fitting that the name of the region should be rooted in time, as this very trip was a voyage through human history and personal memories.

One thought on “Midi”