We had done our homework. Constantly checking the forecast had paid off. A band of high pressure was approaching that would last for the entire day over the south of Iceland, giving clear skies and good visibility. Even the wind would drop during the morning. We made our plans accordingly and looked upwards.

Sun and rain, the icelandic mix

We had decided that if presented with such an occasion, we must use it to climb up onto one of the glaciers and enjoy the higher terrain. There were multiple choices but one stood out from the rest: Eyjafjallajökull, the volcano that sent most of Europe’s aviation system into chaos in 2010. The eruption had torn through the ice-cap above the caldera and the ejection had cooled suddenly, creating a cloud of ash hazardous to aerial transport. As it slowly drifted east, long distance land travel suddenly came back into fashion. I remember being stuck in Italy and being forced to hitch hike and catch multiple trains to get home. This explosive episode would have made the volcano a household name if it had been easier to pronounce. Another reason for choosing this ascent was that although we were equipped with gear for glacier travel, we didn’t have enough for more technical ascents. The other, bigger glaciers would have demanded more time for them to be worthwhile. We would approach from Skógafoss, and take the Fimmvörðuháls trail towards Þórsmörk. Although this itinerary does not present any serious difficulties, the recent storms would have hidden any crevasses. Because of this, like on all glacier hikes we would carry a complete safety set to prepare a pulley system in case of a fall. 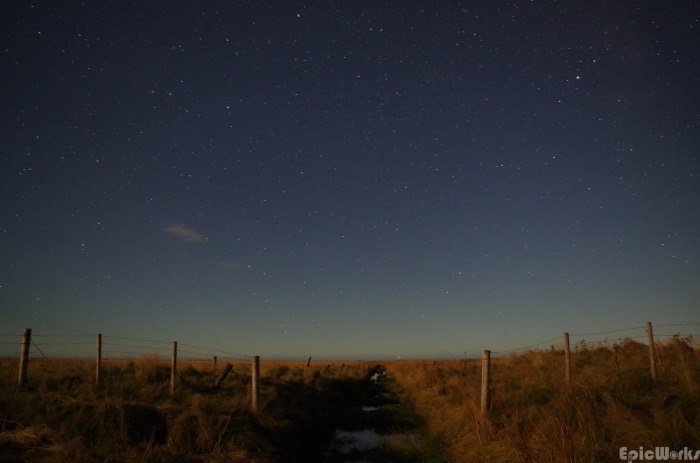 The night before our hike, the sky clears and the stars shine

Early bird gets the worm

We left before daybreak. The huge waterfall echoed in the dark, the water pounding off the stones. The clear skies mean it had been a cold night and everything was icy, making the ground hard, frozen beneath our feet.  Our headlamps raked the trail, and as we gained height, we started to make out the shapes in the pre-dawn gloom. To our left, the path dropped steeply into a beautiful canyon, incised with stunning drops and waterfalls. Passing one of these we came across an incredible phenomenon. The wind had blown the spray from a fall onto the vegetation next to the path, slowly freezing it. The plants could clearly be seen inside, encased in an armour of ice. It was a very beautiful sight. Continuing to advance, the orange glow behind us turned into bright rays of light. The mountains became greener, and the white glaciers added a dramatic backdrop. We could see our objective, rising lazily to meet the sky. Still far off, we needed to follow the trail up to the pass from where we would approach the volcano.

Far on the horizon is our objective

The river runs down to the Skogafoss 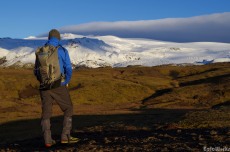 Greg looks up onto the glaciers

Encased in an armour of ice

We progressed well, impatient to reach the glacier as soon as possible. Not knowing what the snow would be like, we were concerned that it might be too soft and slow our progress. Reaching the snowline, we were reassured to find that the strong winds and cold temperatures had kept it hard. We could march easily on top without sinking in and kept a steady pace.

Crossing the snow line, the snow is still hard underfood

Ater a quick pause it’s time to get going again

We hike along the ridge, to the west and up onto the ice cap

Following across the flat snow plain

By mid morning we were at the pass, and the ridge afforded us a view of the other side; valleys that had been plastered white for the rest of the year, empty and bleak. To our right, the Mýrdalsjökull glacier seemed huge. But we would be heading the other way, leaving the trail, and head due west to the summit. Approaching the Eyjafjallajökull ice cap, we were once again surprised by how flat it was compared to alpine ascents. We navigated by keeping a steady latitude, the possibility of crevasses keeping us alert. But the wind had hardened the snow into an ice-like consistency that held our weight well, and by keeping to the ridge, we did not see any dangerous holes.

The sun shines on the sea from where we have come

For the next few hours we trudged forward enjoying the calm. The view became more impressive. The Mýrdalsjökull behind us looked like a creamy pudding dropped on a mountain range, slowly oozing between the peaks.  The lack of features made it hard to ascertain how much further we needed to go, until Greg stopped and waved back at me. He took in some slack and I approached. In front the glacier dropped away into a bowl shape, surrounded by a steeper rim. It was the edge of the Eyjafjallajökull crater! As we stood on the lip, we were completely alone, with only the company of the clouds flitting across the sky, and the sea far, far away, glinting in the sun…

Greg slows down as he nears the edge of the volcano

With a featureless terrain we navigate along the same latitude

Looking back, the Mýrdalsjökull glacier can be seen streching out over the mountains behind us

Having been on the glacier, we could not leave without seeing another type of ice mountains. The type that float! Icebergs, or ice mountains (berg means mountain in German), break off from the Breiðamerkur arm of the Vatnajökull and slowly drift across the Jökulsárlón. It is on the edges of this glacial lagoon that they can be observed, dancing to the beck and call of wind and the tide.  It has become one of the better known sights of the Icelandic south coast and people come to enjoy the magical colours of the ice. Depending on their age and density, the bergs can vary from young, air filled white to dense dark blue. The first types reflect light, the second absorb the red radiation. Some are decorated with bands of black ash, pressed into wonderful marble-like swirls.

Mist and ice on at Jokulsárlón

Having arrived early in the morning it was still quiet. A faint mist hung over the water, disappearing as the sun lit up the surface. But there is a better way to look at the ice-shapes than from the shore: packrafts! 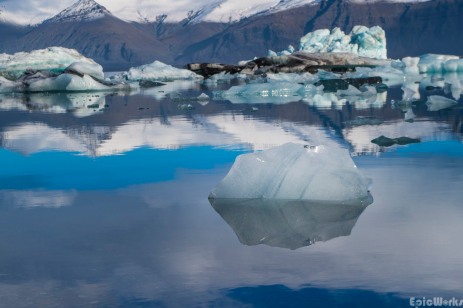 Ice reflections. It is still early and the water is calm 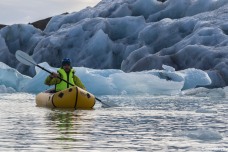 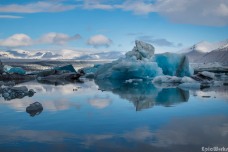 The ice lagoon in all it’s slendour

Greg paddles between the ice

Blue Ice. An imposing wall of blue ice, compressed by the weight of glaciers

Time to reflect on our journey

Heading out to discover more

Paddling through the calm water, we picked our way through the moving shapes. Suddenly a large block would roll over or break off, sending ripples through the flat surface. We felt the water with the tips of our fingers; it was cold and slightly salty. Now and again we caught sight of a small black shape popping up for a few seconds. It was watching us before disappearing again, wondering to itself: what are these strange creatures that glide between the ice? It was of course a seal, following us around, curious about our presence.  Somewhere between the jumble of shapes we came across a beautiful blue iceberg, the wall of solid water towering above us. Looking into the deep azure, I wondered how long and far it had travelled, having come slowly down the mountains. Crushed by the pressure of the glacier maybe hundreds of years had passed before calving into the lagoon and floating into our path. 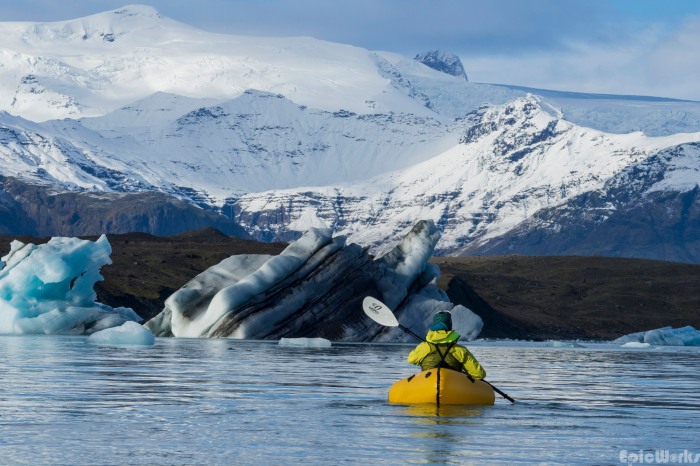 Like a day, coming to its end, so had our journey run out of time. But like the culmination of the diurnal course, there was one last surprise.

The sun sinks behind the Westman Islands, as we head back along the south coast

Our last sunset of our Icelandic travels

The lone fisherman, also enjoys the last rays to swing his rod forwards

As the last lights began to fade, we turned our eyes upwards. The stars were flickering through the thin veil of cloud that dissipated slowly. And then something else, quivering and pulsing across the night sky. What an end. 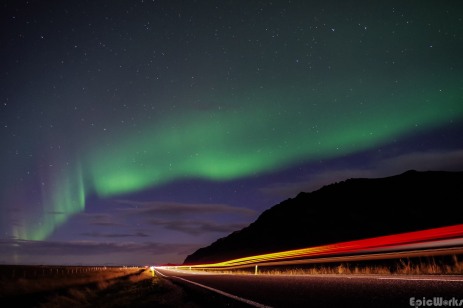 Above the ring road

Green lights and low clouds dance in the sky 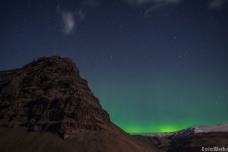 The fairy lights flicker near the summit of Eyjafjallajökull 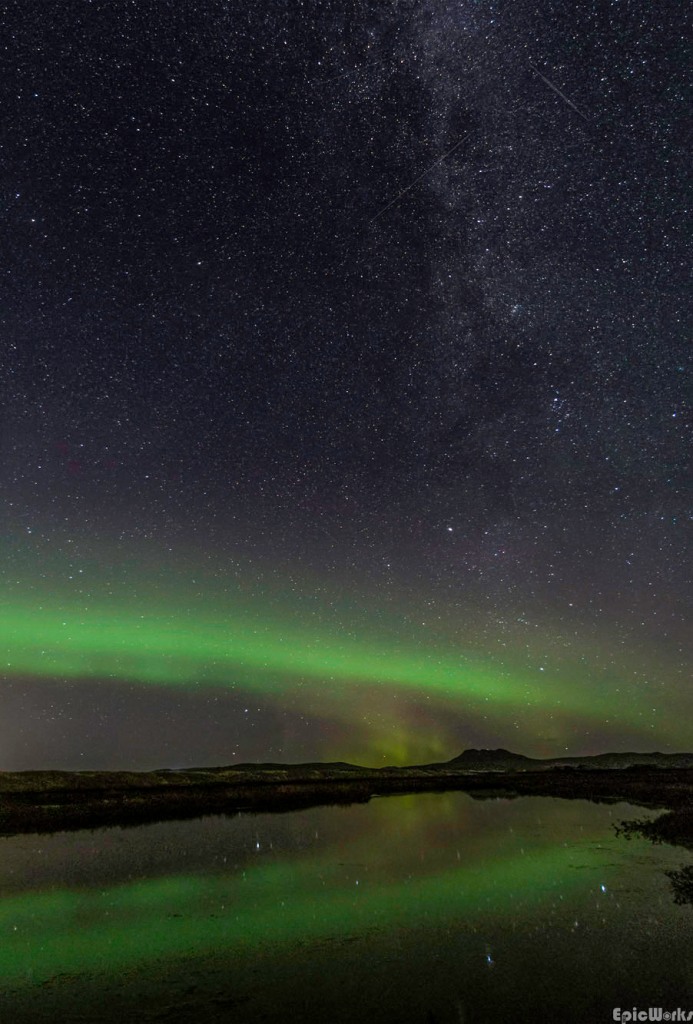 Northern Lights and the Milky Way.

One thought on “Ice Mountains”