Skazka means fairy tale in Russian, and this hopefully was where we were heading. One of the last recommendations Alex had given us before leaving Karakol was to stop off halfway, just after Tosor and go and see the red rock formations known as Fairy Tale. With these very scant directions we set off on the last marshrutka of the day. Aboard we met a New Zealander who was paragliding around the country and a Canadian who had been volunteering at the CBT. With their help we managed to get off were we had been told, about 5 km after the village of Tosor. Once the dust had cleared we looked up and down the road for any signs or indications. There were none. As the road runs a few metres away from the beach at this point we went down to have a look. It was quite windy and there were white capped waves hitting the sand. We met a couple of Germans who had just cycled over the mountains and never heard of the place we were looking for. We walked up and down the main road  to try and get a better idea of where we should go but of no avail.

So with no real idea, except the vague notion we had to follow the river inland, we started up the only available road. After a quick hitch-hike we had gained a few km’s but still no sign of anything remotely looking like Utah. As we had been driving up I had spied some redish looking rocks on our right, so we decided to hike up into the hills on that side. By this point it was raining and the weather pretty bad, so we searched for the flattest possible spot and pitched up the tent. That evening we spent hours trying to decipher our Russian maps, and look for viable locations for Skazka. By bedtime all we had decided was to climb as high as we could and try and locate it by sight.

The main road from Karakol to Balykchy. 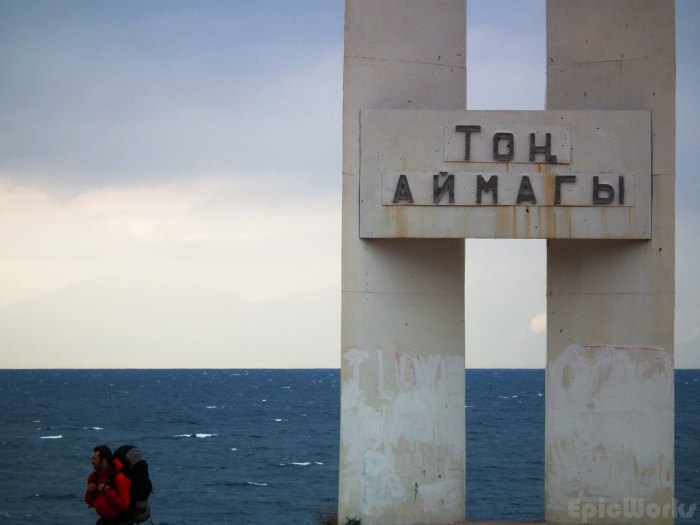 Mounument on the banks of Issyk Kul. 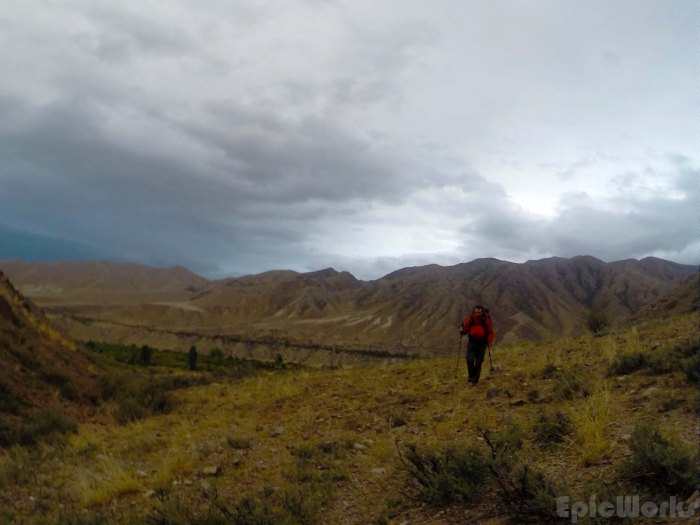 Looking for a flat campsite. Fast!

Next day we set off, up the barren and sandy slopes. The mountains were completely different from Karakol, and completely lost the Alpine feel. These were big sandy mountains, cut out by wind and rain. With no trees the only vegetation were small bushes and spiky plants. We soon gained altitude and as I crested over a sharp rise, the other side opened out before me. Down in the valley, red shapes! It didn’t look like much from here, but was definitely something! As we had started to climb we decided to go all the way and then go an explore the valley later. So we continued up the little path to the summits inland. The dry mountains with the intense blue of the lake behind us was charming, but felt more like the Mediterranean than Kyrgyzstan. As we got higher, the weather changed fast, and we were soon walking on patches of snow (it had rained during the night). From the top we could look down onto the huge lake, but also see inland, where hundreds of glacier covered peaks played hide and seek with the clouds. As it was pretty cold we didn’t stay too long and soon started back down, choosing to try and find another path. Although there is scarce vegetation, this was easier said than done: we soon found ourselves on pretty steep terrain. What was worse was the fact that the slopes where separated by small ravines choked full of spiky vegetation. After several attempts we found our way, and were once again out in the smoother folds of the mountain. From here we went arrow straight towards the red rocks, which were between us and the lake.

Sandy mountain crests in the sun. 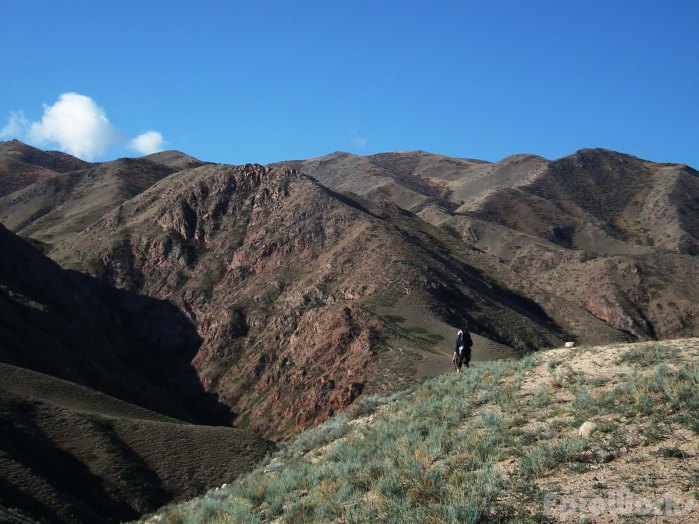 We hike into the folds of the mountains to get a better view. 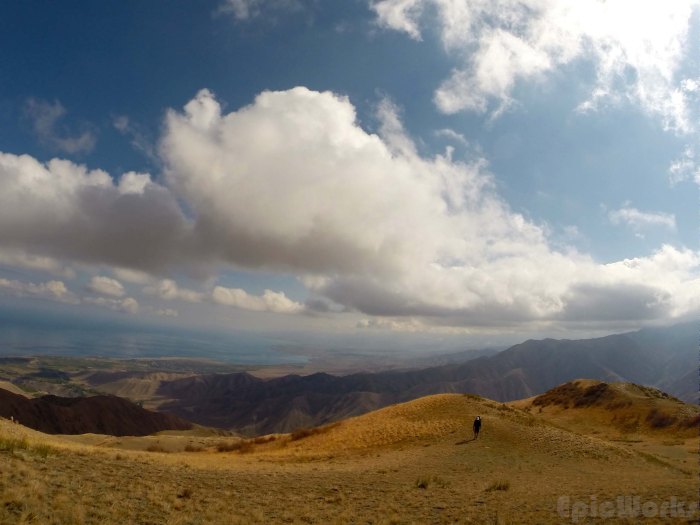 The view of Issyk Kul opens up behind us. 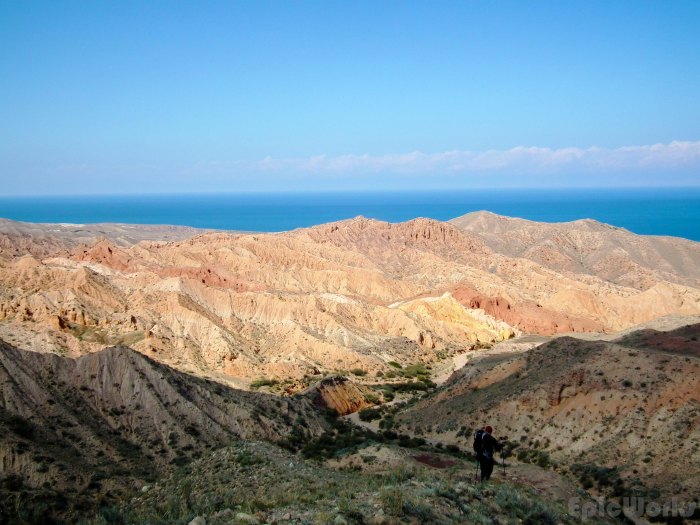 The colours of Skazka seen from above. The lake is infinite.

As we approached, we could see that there was in fact a long band of red rock that stretches parallel to the lake. Due to its different composition it has been eroded at different speeds and produce the beautiful and sharp shapes that are left. What is more, it’s not just red, there are sections which are yellow or white. This, combined to the sandy colour of the mountains around and the intense blue of the lake and sky produces some great visual effects.

We dropped our packs and started to explore the formations. The first section we came across was quite small, but had some very nice vertical formations. Although the steep shapes ask to be climbed we soon found they are quite brittle and damage easily. In some cases it is possible to get up high along the flatter ground without damaging the sides. In others the natural flood rivers act as perfect little paths that zig-zag amongst the sculptures and slowly take you around, like some sort of tour-guide. After the first section we walked down the dry river and turned right to explore a second section. More sections of yellow and white mixed into the red, this is the farthest east of the whole complex. Several holes in the walls make perfect eyes for the imagined faces.  After wondering around this section we again went down the river and turned left. Hiking up a little we came to the third section so far. This is the one with the fairy-tale castle which probably gives the name to the whole zone. A cross between Mordor and Disney’s castle, the symmetry is beautiful. By this point we were severely dehydrated having run out of water in the morning, so didn’t stay too long. This was a pity, as when I followed one of the little paths leading to the top of the castle I could see that the red rocks extended quite a lot further towards the west. A small path seemed to wind in and out of the formations, going who knows were?

The menagerie. Find you own animal. 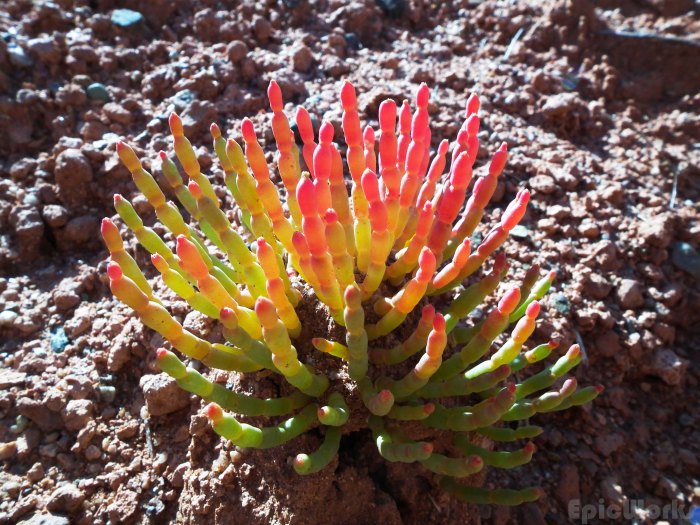 Colours everywhere. Beatiful plants in this driest of places.

Thomas explores amongst the rocks. 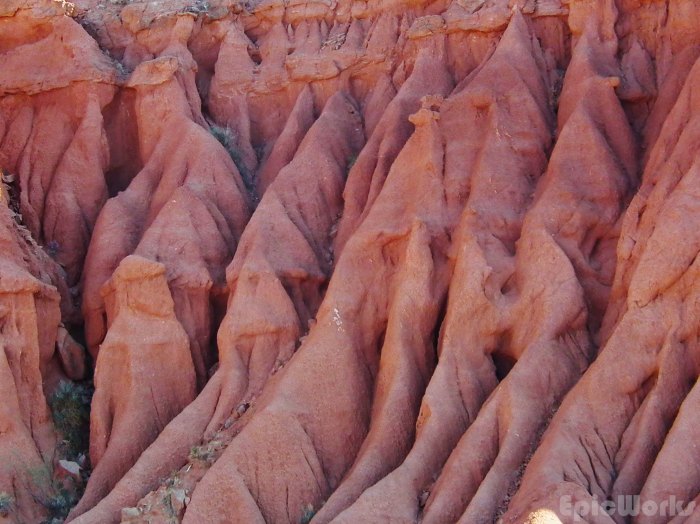 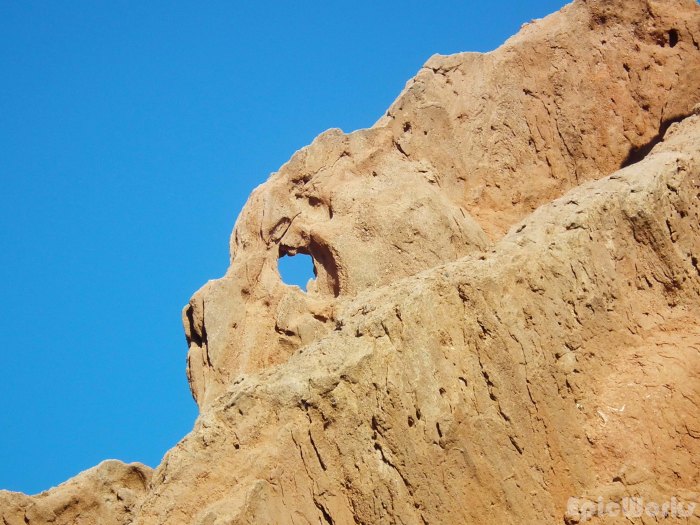 What animal do you see?

The power of water.

Me and the rocks. 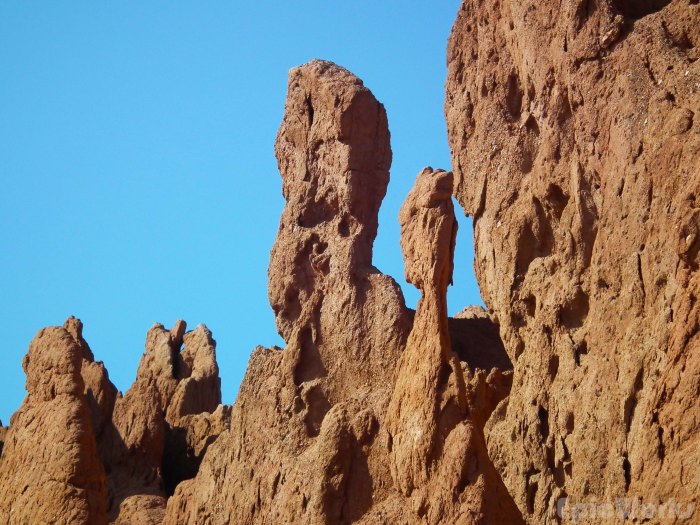 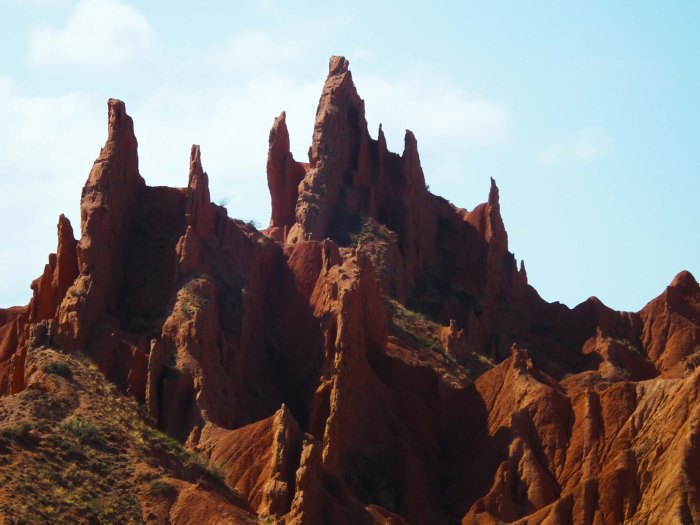 The castle. Maybe what gives the place it’s name? Mordor or Disney, you decide.

Heading down we were soon back on the main road, and walked back towards were the bus had dropped us off. At the small roadside bar we were able to get some water, as well as some much needed beers. Oh, and vodka. It’s soo cheap! With our new supplies we headed to the deserted beach and set our tent up. Sitting by the waterline with a much needed drink we watched the sun slowly descend. As the shadows lengthened, the peaks on the other side of the lake started show, breaking the illusion of an infinite sea.

Northern mountains from the south.

There is a signpost pointing up to the canyon. We just dind’t go far enough. If you come from the West you should see it before getting to Tosor, if you are coming the other way it’s after the town, about 5 km, soon after the large white monument in the shape of an H.

There is no water in the mountains, so make sure to take enough. Issyk Kul is slightly salty, so is only good for cooking. Because the land is so dry, it will flood when it rains, so take precautions for that too.