One of the best things of living in the Alps is being able to just go out and ski or climb stuff without any real planning. Instead of maybe months of waiting and worrying about weather and conditions, it means you can just set off after work and make the most of a couple of days. This was exactly the case when my flatmate H. and myself, set off towards Switzerland. With only a vague idea of where we going, 4000’s had been mentioned but no route or peak had been selected.

We arrived in Saas Fee around midday after a leisurely drive along the lac Leman and up the Rhone valley. As we had limited time we had finally decided to try and do the Stralhorn the next day and maybe Alphubel on the Sunday. This mean all we had to do was hike up during the afternoon to gain altitude and be ready for the long distance on the glacier.

Like Zermatt there are no cars in Saas Fee, only small electrical vans that look like life sized toys. This also means that you have to hike across town to get to the ski slopes and the beginning of the climb. It was quiet and clearly slightly lethargic after the snow season, with few people in the street. We soon left the buildings behind and after a few hundred metres of grass were able to put our skis to follow the pistes several hundred metres up. Stopping at the closed restaurant next to cable car arrival we had a drink as the weather steadily got worse. With almost zero visibility and the first rain drops we decided to set up camp on the wooden floor, slightly protected from the weather. Luckily it soon started to snow, and after some supper we were in our bivy bags.

Next morning it had cleared up and we set off up the last few hundred metres to the Britannia hut where most people start the route. As we went up we asked ourselves how it must have come by its name… Anyway a short pause there gave us an idea of what to expect from a Swiss mountain refuge: huge, ordered and expensive. I almost felt fond of the chaotic and cramped French huts. Back into the cold we skied down to the glacier and set off for the long haul to the base of the seracs. The weather was supposed to clear, but it stayed cold and gray most of the morning. Even so, as got closer to our destination the view wasn’t too bad! After a short steeper part and some snow bridges we got onto the long ridge which goes to the top. From here we could see the Zermatt side, and all the famous peaks there. Nearest was the Dufourspitze, the summit of the Mont Rose which we had originally thought of doing, slightly closer than Castor and Pollux, as well as the sharp needle of the Matterhorn. Just like on the chocolate. Taking of our skis for the last ten metres or so we got to the summit, but due to the wind didn’t stay long. More wind on the first half of the descent, once we were back onto the glacier it was a perfect powder run for several kilometres, before skinning to the refuge and down to our modest base camp. 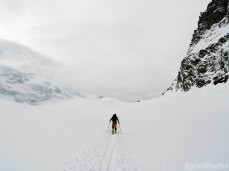 Arriving on the ridge and closing on our destination. 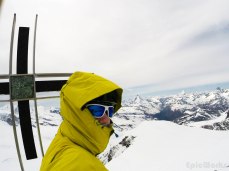 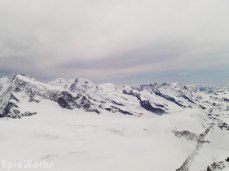 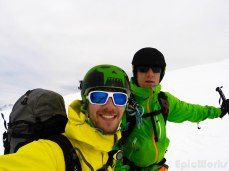 Ready to hit the descent…

Last check before we go!

Stralhorn and glacier from where we have come.

Next day we were up to see the orange rays glancing off the sharp sides of the Dom, the highest peak in the valley. We had decided during the afternoon to try and do the Allalinhorn due to the fact that it was slightly closer and lower, and soon set off up the valley. But as we climbed we could help looking at the Alphubel on our right which looked if anything easier and more skiable. So when it came to choose, it was definitely our first option. Following the several groups in front we made slow but steady progress. Feeling better with the altitude than the previous day we sprinted under the large seracs before the final climb. Luckily Friday’s snowfall had accumulated slightly on the east faces, making the ski up that much easier. The track zig-zagged up through the steeper part before heading south for the summit. Arriving on the top I was surprised to hear Catalan. After some remarks of “collons, estan per tot arreu” they turned out to be from Barcelona. As all except one were equipped with split-boards it was the largest group I’ve ever seen with them in the high mountains. After gazing on the 360º view around us, even catching a glimpse of the glimmer Lago Maggiore on the Italian side and Mont-Blanc on the other we set off for a +2000 m descent. E-pic. Check this out!!

Skiing almost into town, I’d finally had a taste of some Swiss 4000s! 🙂

Across the ice-bridges on the way up

Matterhorn with the Mont-Blanc in the distance.

Heidi and her Ferrari

With such incredible views it’s quite cool to know what you are looking at. You can generate a computer view of the horizon using this Panorama Generator! Here are the ones for Alphubel! 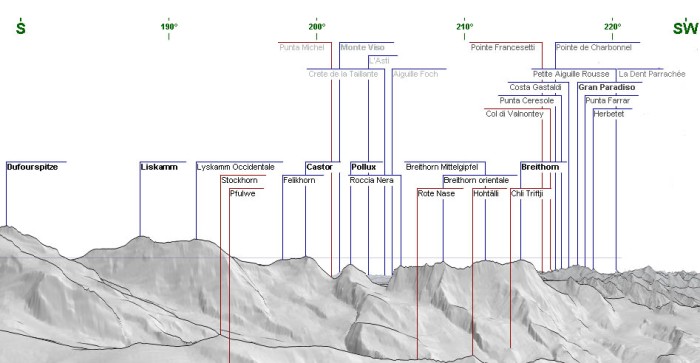 One thought on “A Fee ride”