The Aiguille Noire is a small, sharp peak that culminates at the end of a rocky ridge. This unrenowned peak is hidden in one of the remote valleys of the Cerces – Thabor range, behind the famous Col du Galibier. After much debate, we had chosen it for our annual, almost ritual summer outing with Vincent.

The itinerary up the ridge and the summit

Meeting at Lautaret, we loaded all the gear into one of the cars and set off up the road to Gallibier and down the other side. Although it was August, it had snowed in the night, painting the summits white. Hoping that this wouldn’t impede our climb, we started along the valley. As we hiked higher, the view was magnificent. It was quite windy, and the gusts tore at the clouds, ripping them apart over the sharp peaks rising sharply around us. The white of the snow contrasted brightly with the green moss and the darker rock faces. It stood out even more as we came over a small rise and were greeted by the bluish green of two mountain lakes. From this position we could see the ridge that we would be taking up onto the Aiguille Noire. It is a south facing crest that rises slowly at first before climaxing at the pinacle.

Vincent is good to go.

Snow, wind and clouds play with the peaks 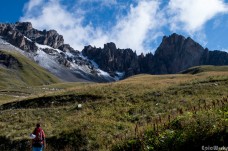 Up the Col de la Paré

Our objective, rising up above the lac du Gran Ban

Food for thought, checking out the ridge (Courtesy V. Fellman)

Before starting, we had a quick bite to eat and looked up at the first part of the climb. It seemed quite easy and dry. It was the other side that was more worrying, because we could expect to find more snow. We walked up a small path that zig-zagged between steep slopes before coming to a small outcrop. A jagged section of rock rose before us, made up of hundreds of sharp spikes, jutting into the sky. No problem to find a place to put slings on! After hesitating about the actual route I set off, finding good, solid hand-holds. I hadn’t gone far before coming to the fist abseil, which dropped down to an intermediate col. Vincent joined me and we dropped the rope over. I went down first, descending into the heart of winter. Out of the sunlight, I suddenly found myself surrounded by snow and ice. The wall was plastered with windswept frost that came away as I touched it. It was easy going, the only difficulty being the two or three meters that separated the end of the abstail with the little platform on the col. Clawing at the rock while still on the rope I traversed up to the flatter ground where I could get a decent footing. Vincent followed suite, and I was able to pull on the rope end to facilitate the traverse.

From there the central part of the ridge alternates small climbs with relatively easy terrain. Depending on how closely you follow the crest it becomes more difficult. There are multiple good anchors on the steeper sections and the rock seems to be well purged, affording good purchase. It is simple enough to be mostly done roped up at a constant length. I think that ridges are one of my favourite terrains for alpinism and perhaps the most rewarding. This is principally due to the sensation of freedom, as well as the view. After all, one of the main reasons I still go into the mountains is to apreciate the beauty of them. A mountain crest is naturally aesthetic. It is often the easiest way to access the summit, by reducing a complex and irregular terrain down to a simple line that can be drawn in one’s imagination. 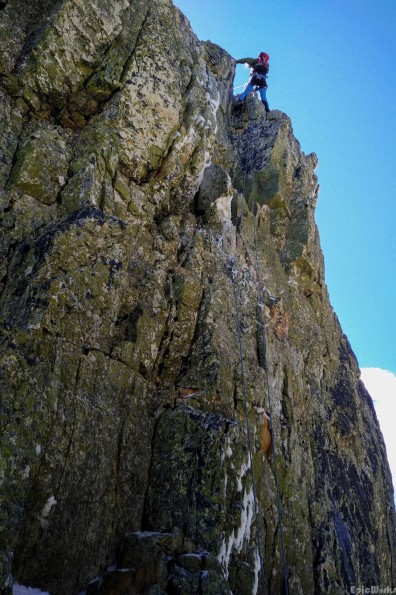 Vincent climbing in one of the easy sections, the massif du Thabor behind

We continued our progress surely but slowly along the ridge before coming to the final climb up the Aiguille. I set off first, following some bolts in the rock. After a small athletic passage I found myself stuck on the ridge, a large block of rock barring my path. I could almost edge around it but didn’t want to risk it without any protection, so I came back down. The alternative was another small climb to reach the next section and thus bypass the boulder. I gave it a try, but after my first blunder I’d become less confident and decided to back down. Vincent went up next and of course made it look as easy as it really was. From there, a short passage with decent drops either side took us to the last scramble beneath the apex. We came up from the east side, and looked down from the top, giving onto the originally named Combe de l’Aiguille Noire.  The small resort of Valloire sat far off in the distance.

After skirting the peak around the west side we re-joined our upwards itinerary for the descent. A short abseil allowed us to re-descend the steeper passage. From there we clambered down to where the ridge meets the Aiguille. We then branched off to the left and took the little path going down the east side. It loops back down to the starting point, just above the sparkling lakes. By this time the sun had started to drop in the sky, but not before having managed to melt most of the snow. Summer had returned to the green valley.

Heading up to the pinnacle 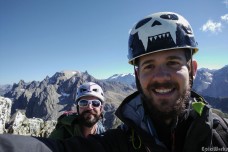 On the top of the needle

Climbing back down to the col, the path goes down on the left

The lac Rond and lac du Grand Ban. in the wild Cerces.