The yellow grass extended away as far as the eye could see, reaching the horizon. An infinite number of individual stalks closing ranks, not quite ready to be cut down by the roaming herds.

Awaking to the noise of the waves lapping the beach a few metres away from our tent I stuck my head out of the door. The sun was much too bright after last nights vodka, so I proceeded to retract back into my sleeping bag. About an hour later, and having got some food into ourselves we were ready for the road. Climbing back onto the highway, we were hoping to get on one of the marshrutkas. As two of them went past without stopping, we shifted tactics to flagging down anything that made it’s dusty way over the little hill in front of us. Eventually an old man stopped and we threw our bags in the bag. It felt good to moving again!

As the countryside flew past we just looked out of the windows in wonder. In Kyrgyzstan any travelling is worth it, and looking out of the window always interesting. As we followed the south edge of the lake the mountains on our left offered up new and changing shapes, whereas the lake’s large field of view meant we could see far and wide. As the road turned inland we drove past villages, canals and fields. Everywhere the tell-tale signs of half  finished, half painted houses showing an ever developing countryside. Upon getting to Balyktchy and paying our driver (sort of like hitch-hiking but not quite!) we had some lunch and tried to find a ride to Naryn. As no buses were running we had to turn to the un-budging taxi drivers. Having put our bags in the boot, we had to wait for the car to fill up, as we were the first two passengers. While we waited, a car turned up and four Czechs jumped out. After saying hi, it turned out they were also looking for a ride, but to Song Kul. As we also planned to go there, it made sense to join them. Thankfully their Russian was much better than our none existent skills, and we soon had a ride sorted out in a six-seater. Back on the rode we headed west towards the Dolon pass. Drinking vodka offered by our new found Czech friends (Thomas, Thomas, Daniel & Magda), we were soon at Koch Kor (the real one! See Scene II) where we bought some supplies. We had heard the road to Song Kol could be pretty rough, so we weren’t too surprised when out people carrier turned off the tarmac onto a dirt track that started to climb up the valley. I say we were expecting it to be bad, not to be going up there in a car with no special tyres or all terrain capabilities. As the vehicle trembled and shook over the bumps and chunks off rock, we were once again stuck to the glass. Having turned off the main road it was soon quite remote, and all we passed were isolated farmsteads. Hooting to push past the cattle, be it cows or sheep, our driver took us ever higher via a track that looped up through the centre of the valley and kept climbing. As we reached the col, we caught sight of the lake, acting like a mirror to the sinking sun. Checking my watch we were at 3500.

We ascend towards the pass into Song Kol lake

The valley we had just driven up 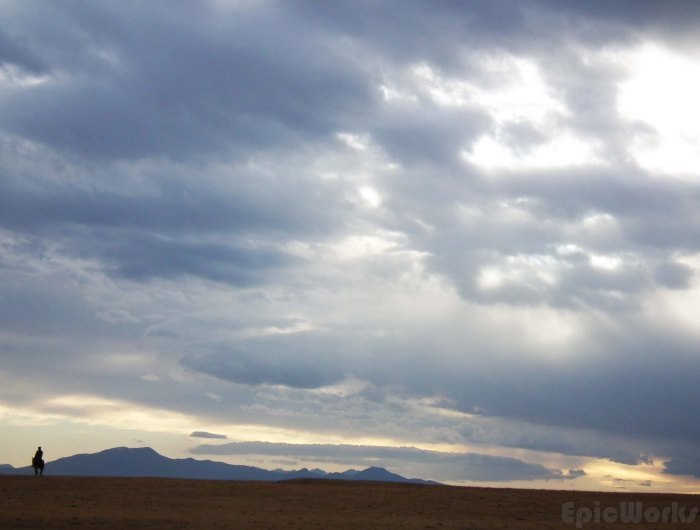 Arriving on the plains we are greeted by the first hoseman

Driving down, through a small river, and across the plains on the edge of the lake we arrived at the yurt camp. These are on the east shore, and many of them are organised by the CBT. As we had our tents, we all set our camp at the far end. We were treated to an incredible sunset, the grass slowly turning bright red. Horses and donkeys strode around us, highlighted by the last rays. That night we ate in one of the yurts, drinking the bright red tea which is served from two kettles, first concentrated and then diluted with hot water. As it was almost the end of the season, there was hardly anyone about, and apart from another couple that joined us that evening we were the only tourists we saw on the lake.

Thomas in the sunset 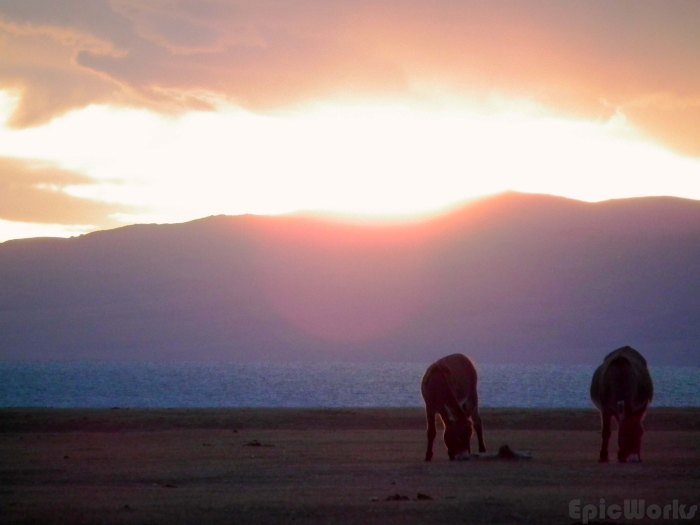 As we didn’t have much time at Song Kul (we had prearranged our driver to pick us up in a day and a half) next morning we were up bright and early. Being quite high up the ground was frozen, but as impossibly long shadows cast by the yurts slowly shortened it grew warmer. We headed north, following the edge of the lake. As we walked the yellow grass extended before us like an infinite carpet. This really was really horse land. The noble beasts were all around us, and in the distance we could see mounted riders herding them together, galloping up and down the rounded hills. A couple of kids ran out of their yurt as we past and gobbled up the chocolate we gave them. As we kept on walking, the two little waving figures disappeared behind us. Our original intentions had been to go all the way to the mountains right at the north of the lake but after two hours they didn’t seem to be any nearer. In front of us, in the distance we could see a small stone building, which we approached. This turned out to be both the tomb of a Kyrgyz hero and a good place to stop for breakfast.  We decided to turn right and head towards the mountains there, which we slightly nearer and by this pointed looked higher than our original objective. Working our way up the valley from the monument, we angled towards the taller of the mountains directly in front of us. The grassy slopes were easy going, and the shapes and colours so different from anything we had ever hiked. Not a tree in sight, as far as the eye could see in any direction, only the yellow grass and the blue sky. 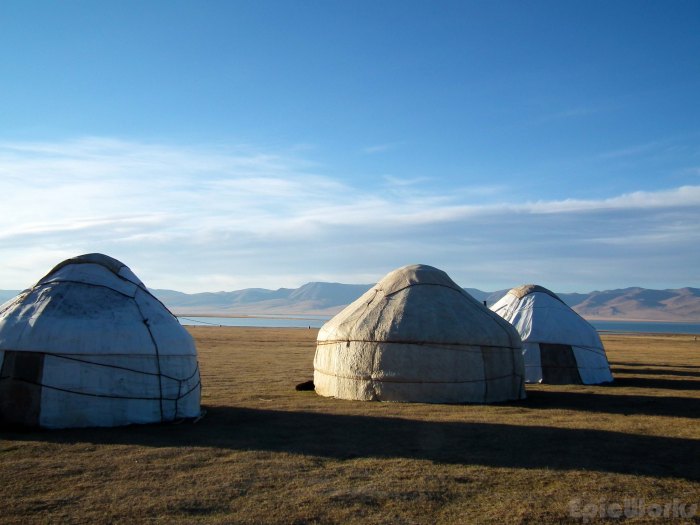 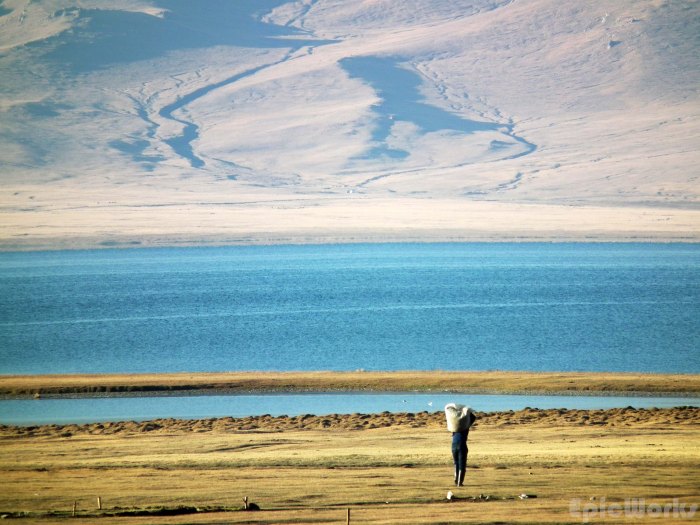 Going to the lake for supplies

Everybody is sleepy in the morning.

One of the kids we encountered. Is it genetic or the travellers chocolate?

It starts to warm up. The nomad’s two sources of food: the fish and the herds. 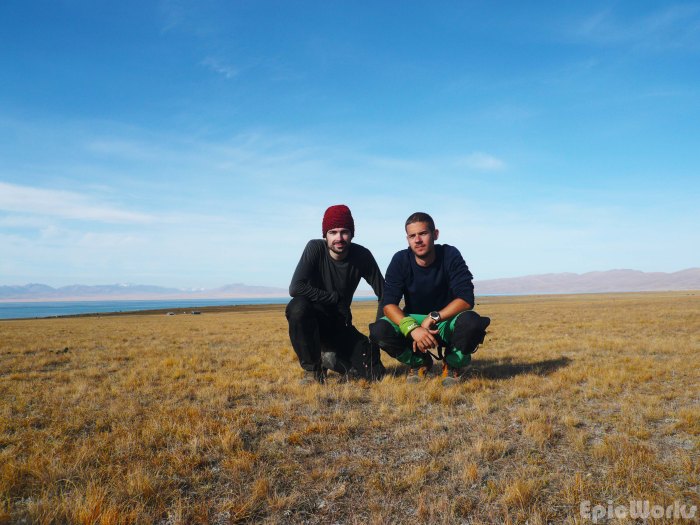 Rob & Toto do the steppes.

The rider herds his cattle home for winter.

We started the final climb of the mountain from the west, up a steep slope of scree and loose rocks. This was maybe the hardest part of the whole route, as the grass had been easy going. From the slope we gained the ridge that runs north-to-south, and by following it we got to the top. From here we could look down on the entire lake and the yurts; little white specs in a sea of grass. Behind us the mountains went to 4000, before dropping into the valley we had driven up the day before. Although quite high up (about 3800) it felt more like hiking in Scotland that actual mountain climbing, partly due to the height of the lake. From our vantage point we could see the herds down in the valley: black dots moving around in unison like some sort of sentient being, drifting across the plane.

Once back at camp we had supper in one of the yurts, Kyrgyz style. The food was simple but good: tomatoes, soup and bread followed by the ever present jams and  honey. As I picked up a bowl full of sweets, I chose a small round white one, thinking it to be sugar coated something. When I bit into it the taste hit me, it was dry cheese! Although not what I expected, the cheese, called kurut, was really good. It’s made from cow milk but tastes more like goat. Being so dry you can just keep it your pocket and snack on it now and again, nomad style!

Next day we had rented horses, and after a slightly later than usual breakfast were ready to ride! We climbed on to our steeds, ready to charge the plains like modern, Gore-Tex clad Genghis Khan’s. We were wrong. Except one of the Czech guy’s horses, the rest were plain slow. And deaf. Try as I might, I couldn’t even get it to canter, let alone gallop. So we set off for a tour of the rolling landscape, punctuated by myself and Thomas (Czech Thomas) practically bouncing up and down on our horses trying to get them to move faster, and peoples horses that would just simply stop for no reason. All I can say is that although useless, they were better than camels. Anything is better than camels…

The hordes have been let loose! 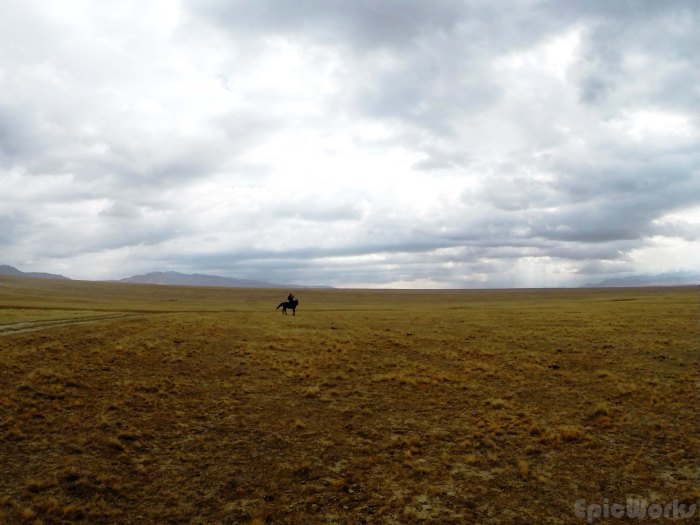 The lone rider. The only horse that acted like a horse! 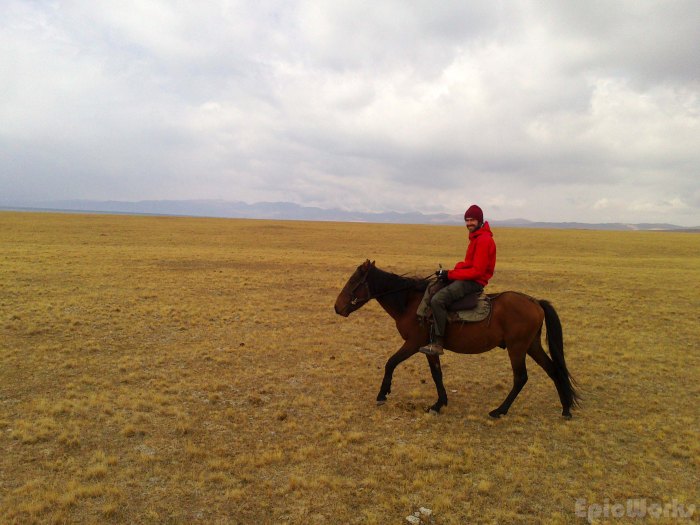 Genghis Khan himself. From the flatlands of Brive to Asia he extended his empire.

After lunch the driver came to pick us up and a few hours later we were back in Koch Kor. Here we said goodbye to our travel companions, and started looking for a place to stay. Before we had even started, an Israeli couple next to us in the bar recommended their home-stay. A quick tour of the town later we were there, and it was them that showed us in, as the owners hadn’t arrived yet (thanks guys!). Once past the high wooden gate, the inside of the house was decorated with the traditional felt carpets. It was also equipped with a warm shower. Yes! Feeling much cleaner, we were then treated to supper in the yurt set up in the garden. Our hosts were charming and the food very good. After the jam and honey they gave us a taste of the the local entertainement, dressing up in traditional robes. The daughter recited part of the Manas epic poem, before the whole family played some music and danced. It was a really familial atmosphere, and gave a small insight into the lKyrgyz customs which we hadn’t really seen yet. After it was bedtime. And I mean bed, a real one! 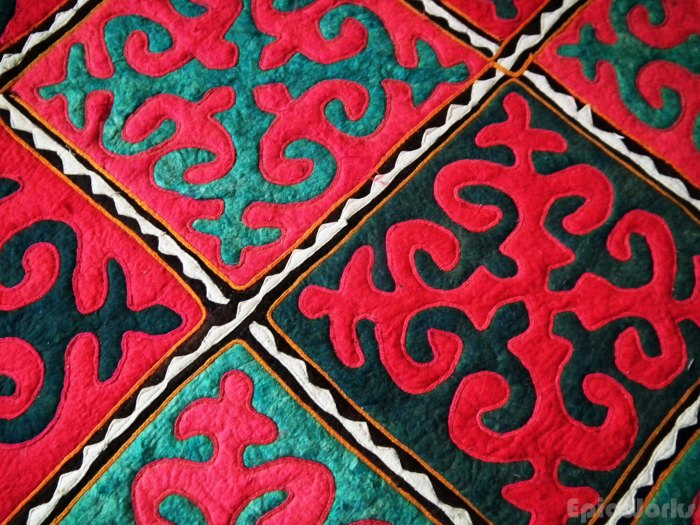 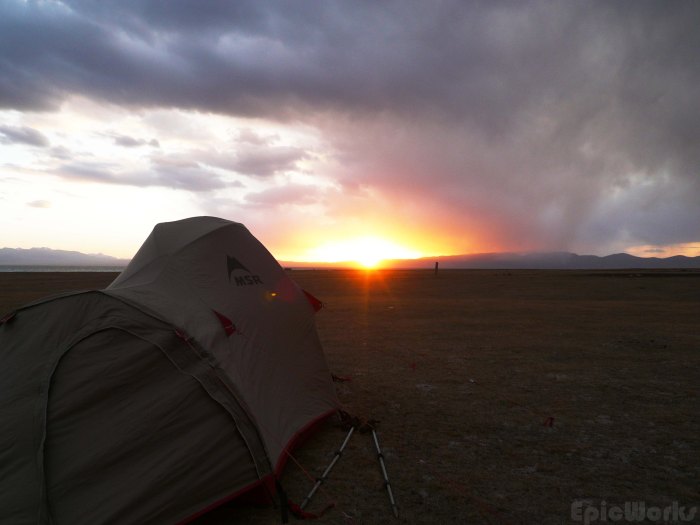