The challenge had been set several months before. We had driven up during the Christmas holidays from Barcelona, only to find the grey faces dry and rocky. Although some snowflakes had started to paint the valley white, winter still had to set in properly and work its magic. We looked up at the Circ de Cambre d’Ase and planned our return…

The weather affects everyone’s mood. Some more than others, but constant grey drizzle is of course depressing, and extreme humid heat doesn’t do much for motivation. In countries where sunlight is scarce such as the Scandinavian Peninsula, sunrise and sunset have kept some of their magic. Families take the time to enjoy these moments, for they are indeed special. In many places people long for warm, cloudless days, to be spent outside dinning under the stars and enjoyed until the early morning hours. I have, over the years, come around to the fact that it is actually quite agreeable to partake in the summer’s lazy temperatures. And of course I strive to make the most of the sunny season’s potential.

Excitement is defined by cold. Happiness can be hot; I will give you that, but thrilling adventures are decidedly quite cool. For me nothing is as exciting as a snowy, wintry day.  Maybe this has to do with growing up next to the Mediterranean, with its relaxed climate. Snow was a one-off, a half-hearted affair that might last till after lunch if you were lucky. So maybe it’s just a question of the grass being whiter?

I think not. Cold weather is intrinsically thrilling. It makes us feel alive, shaking us into awareness. Be it the sea spray on a boat, or an early morning breeze during a hike, it doesn’t have to be extreme to make us a shiver (with excitement!). The best is of course that tingling crisp sensation in your nose, the very smell of snow, that you get in sub-zero temperatures. Is this why children are so amazed when they wake up to a white landscape? The novelty probably plays part, but even in places where abundant snowfall covers everything, kids still enjoy the show. I once read that you are no longer young once you aren’t excited by it. This has pushed me to make a conscious effort to never be annoyed by the traffic jams, accidents and breakdowns that might taint the experience. It’s not difficult though, I am still enthralled! As the first soft flakes start to fall, everything pales in comparison.

With this in mind, it was time to change the Alpine variety for the Pyrenean brand. To return to Cambre d’Ase to climb and ski several of the couloirs. Setting off after work, I set my sights on the Iberian mountains, which to my mind are always sunny.  Memories of summer hikes induce me to forget that the range is often subject to winter storms that can arrive with startling speed.  My last trip of skis had in fact finished in raging snowstorms. And this trip would be no different even though I still didn’t know it!

As I arrived, pounding out beats to keep me awake after the long day and windy roads I saw Jordi waiting for me in the dark. Jumping out of the car it felt fresh and I pulled on some extra clothes. This felt good! We decided to cook some supper, but in my excitement I managed to knock over the pot. Twice. By this point, having sponged off the half cooked soup from my gear we decided to give eating a miss and set off. By bivouacking not far from the end of the valley we would be near the next day’s climb and get an early start. Once the tent was up it was past 3 am and I was completely exhausted. The stars lit up the rock faces and I could just make out a tantalising view with the different itineraries before crawling into the tent. It turned out to be an extremely agitated night and due to incessant shaking I didn’t sleep much. It was only in the early hours that I managed to finally relax and fade into a deep slumber.

In the morning, it was the sun that of course got me into a good mood. Where else do you have such weather but here I thought, looking up the valley. These were the mountains I had in mind! The warming rays coaxed us into action and we managed to get ready relatively quickly. We looked up the valley, the snow crystals glinted in the early morning light. Just how I had imagined!

There are five principal couloirs in the glacial valley, which is on the French side of the Pyrenees, facing north. From left to right they are:  the Grand Couloir or Canal Central, Gigoló, Éclair, Bougnagas and Vermicelle. The easiest is the Canal Central which would be our first ski descent. To start we would climb up Vermicelle, the second easiest. It follows a very beautiful crack between the rocks, rising at about 40 to 45 degrees before increasing slightly at the end. It was in perfect conditions and the great view made for a nice ascent.

Although there were some overhanging cornices elsewhere on the ridge, the exit was clean and safe. We climbed out onto the ridge, from where the view opened out in front of us. Just as we were leaving, a group of French skiers arrived from the other side and started down the way we had come. Feeling invigorated, we made it along the crest looking down into the other routes between Vermicelle and the Canal Central. Here we clipped into our skis and dropped into the descent. The snow was not too bad and we were soon at the base of the climb again.

We now had several choices, and went for Gigoló, which Jordi hadn’t tried yet. The snow here was also in great condition, hard enough to support our weight but easily kicked in to make steps. As we made our way up the relatively steep incline it felt safe and agreeable. The weather had other plans though. The beautiful blue sky we had woken up to had given way to the underside of ominous dark, grey, storm clouds. They didn’t remain ominous for long either. It started to hail soft snow, a phenomenon known as graupel. The little white pellets bounced off us as we climbed up. As they did not stick to the steep surface, we were soon standing in a small river of the stuff, that slid between our legs down the slope. By this point we had reached the steepest part, around 60 degrees. Finding a convenient relay point, Jordi started to belay me on the rope for the pitch. Off I set, alternating between soft and hardish snow. After placing a couple of protections I reached the lip of the ridge. My hands had got quite cold from putting them in the soft snow and as I managed to warm them up the pain was excruciating. The last few steps were the hardest, as it was almost vertical and the soft snow didn’t afford any good handholds. Slowly inching my feet up I managed to get the ice axe over the edge and hooked into a solid hold, and I clambered out pulling on the shaft. Jordi quickly followed suit, not without suffering from freezing hands too! By this point the weather had taken a turn for the worse and had become a raging gale. Definitely very exciting! We headed over to the principal summit, but not liking the look of the exposed side decided to call it a day. The second descent of the Grand Couloir now had some fresh powder. The visibility continued to drop and we skied directly to camp. We picked up the tent and continued down the valley our hair and beards white. 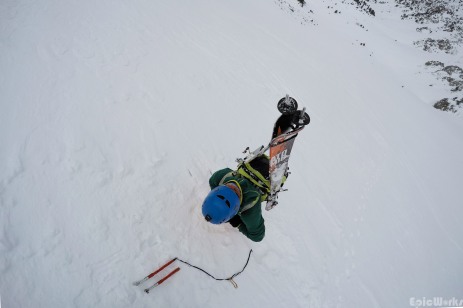 That evening we were invited for supper by Guillem, our friend whom we had met in Iran, on Damavand. Not only had he lent us some gear but had also prepared us an excellent meal, which we enjoyed in his cosy apartment. Behind huge stone walls in the little village we enjoyed the Pyrenean hospitality. The storm was but a memory as we relaxed in the warmth of their home. Excitement had given way to contentment. A great evening ,and a perfect way to finish the day. Merci les amis!