Here goes. Back to the basics. The old and gold.

This is a video of my first ever ski randonée trip, ski touring in English. Or ski alpinism. I never quite know… It is also the first video I ever made, edited from the first GoPro I owned, before they became Hero and all that. So not too bad!

I’d wanted to get into ski touring for several years, ever since I used to live in Barcelona and would go hiking in the Pyrenees. I don’t think there is anything more frustrating that setting of at night, sleeping rough in the snow and setting of at first light , juts to be overtaken by the guys on skiis a few metres from the top. The same guys who have slept in a nice warm bed and had a drink or two the night before. So yes, it is THE way to move in the mountains in winter. Anyway, I’d never had the opportunity to do it before Grenoble, and having moved here for my Masters (or 3rd Erasmus, depending how you look at it…) it was a must.

The little refuge in the woods. (Cabane de Louvet)

So when N suggested a weekend trip in Taillefer with some other friends, I didn’t hesitate. They set off the day before and I joined them at the col d’Ornon. It was mid-February, and the coldest week so far. Three years later I think it was the largest powder dump I’ve ever seen in Grenoble. 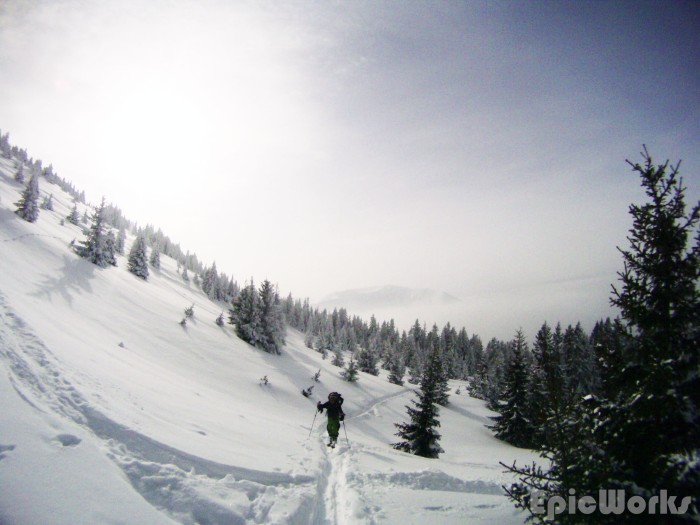 M follows the tracks zig-zagging up the slope.

In fact there was so much snow that we had to change itinerary, due to avalanche risk. There was also too much snow on the road for my car, even with chains, so it was up to N’s Range Rover to smash through the snow all the way to the top. In the sub twenties the snow was perfect, and we made our way to a small mountain refuge. Probably the worst pasta I’ve ever eaten (thanks Nick!) and bed. Next day, everything was pure white. It was cold enough for the snow to just sit on the trees, no movement. We set off up towards the summit and came out at the plateau. Le pas de la mine, the only way through, was deemed too dangerous with so much snow, so we just went down the way we had just come up. Pure, pure powder! I was so hooked! Two weeks later I had my own pair of skiis, and the adventure was just starting! This really was an Epic Moment.

A pair of skiis gave me lots of new directions to explore!