The idea had been to start off Jordi’s stay in Grenoble with a repeat of one of my favourite classic routes, the Aretes du Gerbier. Unfortunately even though we were already half way through July, the weather was not great. Even so we decided to give it a go and to change, made our approach from the west, up from Villard de Lans. This means that the descent is much shorter, as there is no need to re-cross the range to get back to the car park, but does mean accessing the start of the ridge via the steeper west face.  Arriving at the base of the limestone cliff, we could clearly see the cleft of the double brêche above us, as well as the large crack that splits the face, giving access too it. We set off roped up, advancing at the same speed. It isn’t easy to put any protections in as the rock is down sloping, but the start is not hard. The crack then tightens and becomes slightly humid, making things trickier. Fortunately there are a couple of pitons and an old rope, which helps you over this passage. From then it is plain sailing, as the terrain levels off, and there is only a short scramble followed by a hike to the top. Having discovered this new access we were at the start of the traverse, but by the time we got there the weather had got worse, and there was a very strong wind. The visibility had also dropped, so we decided to give it a miss. Although it is possible to absail down, we continued towards the north, and followed the Ranc du Rochers des Agnelons. This is an easy ridge, that can be hiked without a rope, and goes all the way to the col Vert, from where it is possible to re-descend down the west side. Looking back and seeing the clouds clear slightly, we wondered if we had made the right decision. Stopping for lunch, it got colder and then started to snow. Negotiating a harder climb down with freezing fingers, we realised we had made the best choice! It is always a reminder that you can get any weather in summer! 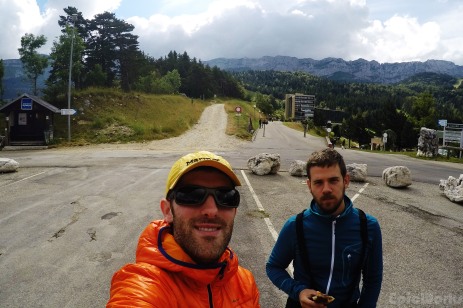 I can believe you dared to bring a selfie stick!. 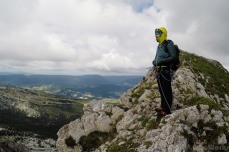 Looking out across the beautiful Vercors.

The fog rolls in, not unhappyto have turned back.

Just before the bergshrund, preparing the attack. 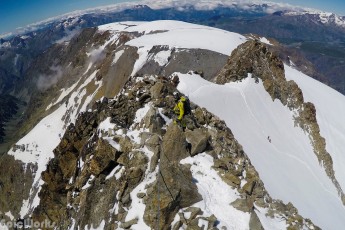 Summit time in the sun! 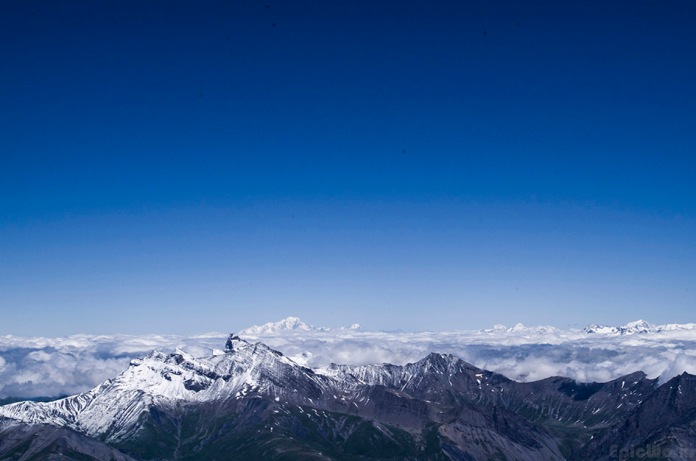 The monsters of the Alps.

With better previsions for the next day, it was time to go high up and do an alpinism test run. Luckily the Ecrins remains very wild, and is not too clustered with metal like other parts of the Alps. But at La Grave it is possible to take a cable car directly up to 3200, saving a lot of time and denivelé! Having already done the hike, I considered it justified to cheat a little, and by mid-morning we were putting on our crampons at the edge of the glacier de la Girose. The objective was the Pic de la Grave. Because it is so close to the cabins and is mostly made up of a simple snow ramp, it is perfect for a first outing or for warming up for the days to come. We roped up and started onto the glacier, walking up what in winter becomes a ski run. Crossing a couple of pretty serious crevasses we arrived at the base of the steeper slope, just below the bergshrund. As training with the rope manoeuvres was a point of the outing, we started by belaying across, using the ice axes to set up the belay points.  Alter this we roped up short and stated up the steep slope, that we made easyier by the recent snowfall, just covering the ice not far beneath. As the terrain flattened out a bit we were able to appreciate our surroundings. The Rateau, behind us brought back good memories, and I was able to point out some of the more famous peaks to Jordi. Arriving on the ridge came across several people descending, before putting our ice axes away and crossing onto the rocky traverse. This turned out to be surprisingly short and we were soon on the summit. As a last team left, we had the peak to ourselves. Even with the metal lines far below on the glacier, it is still a great peak, with great views of the Ecrins to the south-east, and definitely worth getting out there. On the way down we had the choice to abseil down the rock spur to the left of the ramp, but although we had carried two ropes up I preferred to stay on the snow and ice. This was because the rock was broken up, and I wasn’t sure we could make it in one go. So we climbed down the slope slowly, re-crossing the bergshrund. Looking at our watches we realised we had left it very late for the last cable car, so not wanting to hike down -1800, we raced across the glacier, still roped up!

Getting home we were pretty tired, but had to plan for the next day. Taking into account we had about a day and a halt, we had limited options. Deciding to hit Ecrins again, we drew our itinerary across the Dômes de Monêtier. Starting from Mônetier-les-Bains, we planned to hike up as far up the valley of du Grand Tabuc as possible before dropping our camping gear. In function of the time we would try and summit in the evening and then head down the next day. Hopefully we would catch the sunset from the top and with a bit of luck I could get some shots with the good lighting.

Hiking in the sweltering heat, we made our way up the long stone strewn path. Halfway up we came across a group that informed us that it was possible to go over the col des Grangettes, thus looping around via the Lac de Eychauda. As this sounded much better than a return journey, we decided to take the tent up onto the glacier and come down the other way. Finally arriving at the end of the cwm, we gained the foot of the glacier across some very unstable terrain. Roping up, we climbed up and onto the first basin of the glacier. From there we couldn’t see an easy way up onto the second level, as the itinerary given by the map did not seem reasonable. We ended up going up a steep snow slope before arriving at a small band of rock. Jordi took the lead and we were soon across. The ice flattened out and we headed towards the base of Pic Dormillouse. Getting there just as the sun was setting we could see towards the Barre and Ailefroide. The golden light lit up the horizon and even though we were tired we couldn’t help but admire the moment. The last rays were cut off by the imposing silhouette of the Meije. We then hiked across the glacier and installed my little orange tent at the base of Dôme de Monêtier. A full moon shone down on the rolling glacier and there was not a breath of wind… Itineray up to the foot of the glacier.

Across the snow slopes and onto the first basin.

Jordi climbs up onto the glacier, lit up by the falling sun. 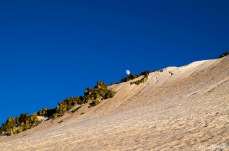 An almost full moon rises on the far horizon. 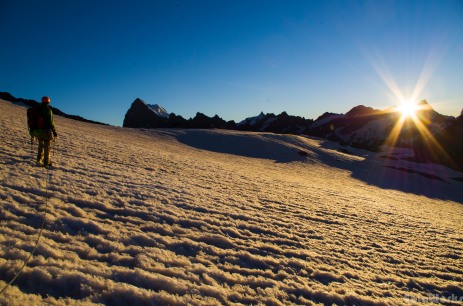 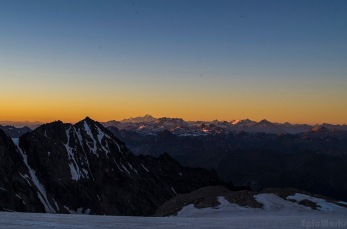 The magical glow acompanies us for a good while. 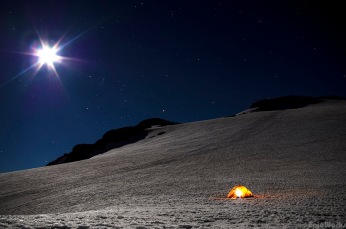 Alone on the glaciers.

Time to get going. 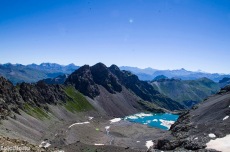 Loop of the glaciers

Next morning there was no time for peaks, so after packing up the gear we headed down the glacier de Seguret Foran. The only difficulty being a steepish section in the middle which we negotiated roped up short, we gained the rocky valley once again. Going around one side of Lac Eychauda, still full of blocks of half melted snow, we took the small path up to the col des Grangettes. From the top, the path down seemed almost non-existent, and we had to climb down between the blocks to find our way. It was amazing that such a path can be hidden in such a steep slope. It had a very Ecrins feel to it, slightly unstable and precarious. Getting onto the track at the base, all we had to do was keep going down back to Mônetier.