Once more, on the top, looking down on the largest glacier of the Ecrins, surrounded by a multitude of dark, jagged peaks sticking up into the sky. Standing, just above the invisible and arbitrary line that marks four-thousand metres above sea level.

This was the third time I had been up here, four years after my first ascent. Each time in different conditions and with someone else. When I first looked down on this view I had just skied up with Nic, and it had been a wonderful discovery. It was so new, so exciting and quite terrifying. It had snowed and we had deep powder. Having come out to try and climb the Barre, I think we both realised we weren’t quite up to it, especially in winter conditions. My mediocre skiing skills were severely put to the test just to get down. That same year we tried again, once again on skis, but up the col des Ecrins. Having set up camp at the end of the valley during a storm, we attacked the col the next day. It was very steep and as we weren’t roped up, so it was absolutely dreadful. FX lost his ski on the climb, so we wrote off the Barre. Instead, Nic and I climb up to Roche Faurio. Nic summited while I tried to catch my breath just below. A few weeks later I was back, but on foot and with Vincent. The glacier was wide open, with deep chasms that we had to jump over. I remember being pleasantly surprised to find the going much easier and the mountain less daunting. So much so, that having set up our tent on the glacier I ran up Roche Faurio again on my own. I was a rather dangerous thing to do as I had to jump over the multiple deep cracks. After a terrible night for Vincent and no water, we got to the top of the Dôme and even attacked the long ridge of the Barre, before thirst and exhaustion turned us back. And finally this last climb, I found myself guiding Isaac, more worried about getting him down early than any sort of danger on the slopes. It’s been the occasion to look back at the previous routes that I’d done, especially the col des Ecrins and soloing Roche Faurio. Seeing  the Barre from so close I still haven’t ever found the right moment to climb it! 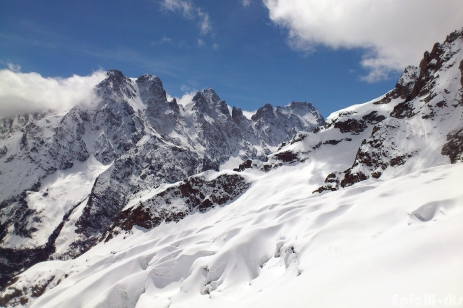 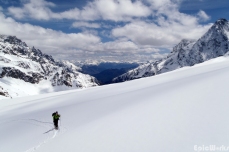 I cross the first part of the Glacier Blanc, perfectly flat under the snow.

Heading up to the refuge des Ecrins.

Barre and Dôme, under the thick powder.

Nic heads out under darkness, tracking out the powder.

We turn back to look down, the other parties following in our ski-tracks 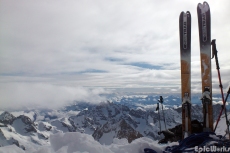 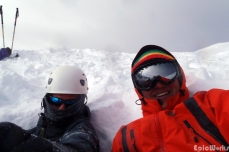 Dug in out of the wind, we can appreaciate the view.

It is so much faster on skis! 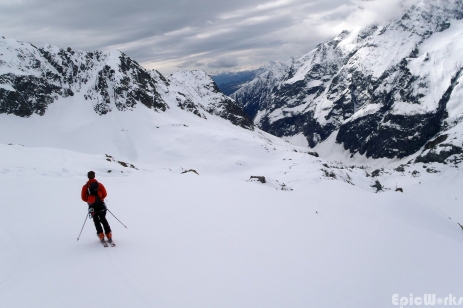 Last section before regaining the valley 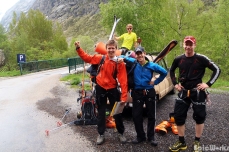 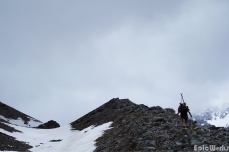 Camp at the base of the col, under the storm.

The col. Steep and menacing.

Attacking the snow slope beneath the col. 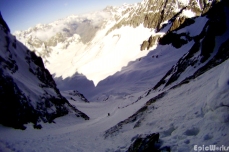 First person view of the traverse and climb.

FX in the lead, myself and Magnus in the last section (courtesy N. Chuch). 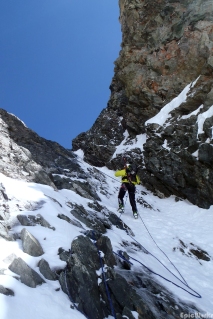 On the way down, abseil (courtesy N. Chuch). 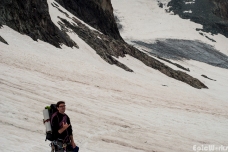 Heading up Roche Faurio solo, our tent gets smaller on the glacier.

Just before attacking the rock section.

Early morning, first steps on of the climb beneath the serracs.

V. goes round one of the massive crevasses.

This outing was also the chance for me to try out aerial photography at higher altitude and film some of the glaciers from above. The limitations are of course imposed by the battery power and temperature, followed by extremely strong light and of course transport. The first two are related to the fact that I did not heat up the batteries sufficiently before take-off, resulting in the inability to start the motors, as well as reduced flying time. I had multiple errors, such as voltage drop, that could be related to the temperature, but also the reduced air pressure which makes the motor output higher. An easy solution is to preheat the batteries, although this can be difficult in autonomous situations. The harsh light produced by the reflection of the sun on the glacier made it much harder to read the screen, demanding sum sort of cover. And finally, although I managed to strap the case to my bag, it was definitely not very practical and added to the weight I already had to carry. Thankfully we were able to share out items between the two backpacks. Finally, from a personal point of view, standing still even for a few minutes on the glacier can get quite chilly, making it harder to get going again after.

The chaos at the end of the Glacier Blanc, August 2016.

The glow-worm. Climbers streaming out of the refuge des Ecrins.

Our destination under the glow. 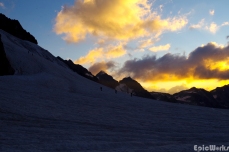 Flying in the cold. 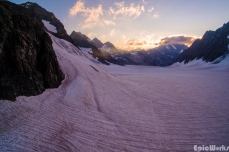 Birds-eye view of the Glacier Blanc.

All the way up. 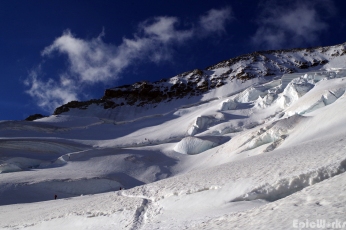 Zig-zagging between the crevasses. 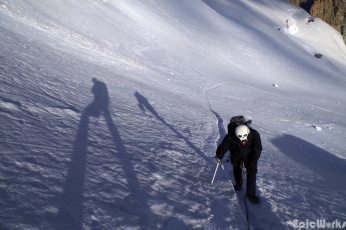 The incredible panorama towards the North and East

Eye in the sky! 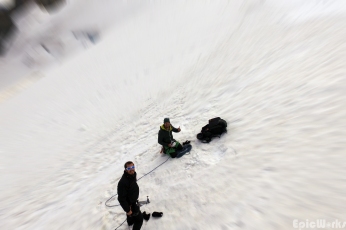 Getting back from the climb, I wanted to compare with some of the old footage we had taken four years ago ago. Pulling it up from my hard-drive, the older pictures look grainy, and the video shaky and completely pixelated ( I will upload some segments soon!). From 384x512p at 30 fps, to full HD at 60 fps, capable of sitting, fixed in the sky. This highlights the use of action cameras for mountain and adventure footage and made me think about the different advantages and inconveniences. It has also led me to reflect on my evolution in photography and video taking skills. I’ve had a love-hate relationship with GoPro’s for some time, of which I’ve owned several. The problem is we have been led to believe it is possible to make professional looking films with a tiny box attached to our head. This is of course not true. Unfortunately, even though the image in the newer models is incredible, it is not their true purpose. This type of camera makes it possible to throw yourself completely into the action and not have to worry about scenes, lighting or anything else. You can then sift through the footage back at home and try and coble something together which will make a great memory of the day. This is fine, but if you want something more cinematographic, you have to step away from them. The world of amateur DSLRs or handheld cameras is huge and covers pretty much everything that can be done without professional equipment. On the other hand, a drone is almost the complete opposite. It is exclusively a film-making (or aerial photo) piece of equipment. It is large, bulky, and demands all sorts of complications. It gets in the way of the actual performance, especially when in difficult conditions such as the mountains. It demands thinking about the whole logistics of the route and does not convey a story as well. If the images were not so stunning, it would not be worth the bother. That being said, it can give a real feeling of space and can transmit the beauty of the environment that it is worth using in many situations. I am of course still learning to deal with these limitations, and will hopefully be able to produce better images in the days to come. A few years ago action cameras were the last big thing, and the market has exploded. It has been interesting to see them go from a few geeks and athletes to pretty much every ski slope. My thoughts now are on how the drone market will evolve, and if it will follow a similar trend, with decreasing prices will make it become a common household item. It seems tempting to think that in a couple of years there will be drones flying around everywhere. But one of the main advantages of action cams is their size and ease of use, and therefore the logistical difficulties encountered above will probably dampen a lot of spirits.  Even really easy to use drones will probably demand some attention. Legislation may of course also cause problems as well. In the meantime, I’m going to be out flying!